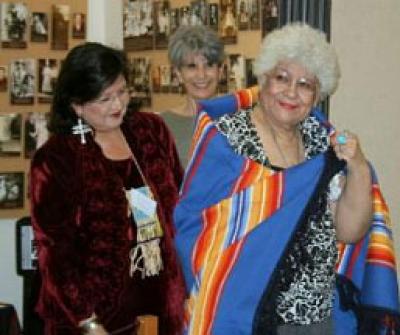 Changing the Osage one thread at a time

Julie O’Keefe, born and raised in Pawhuska, is the president and sole owner of the Grayhorse Group, Inc., a purchasing and Procurement Company based out of Virginia

Julie O’Keefe   held up a pale pink beaded and embroidered shawl at theOsage Tribal Museum June 16. The shawl had turquoise, yellow and light blues in its designs and two women standing nearby nearly gasped.

“My grandmother used to say how elegant the Osage women were so I went to the NMAI [National Museum of the American Indian] and looked at the different patterns,” O’Keefe said. “I started sketching up some ideas for designs of what I liked.” The fringe on the shawl was “shadowed,” something not commonly seen, if ever, on a shawl. The fringe faded from a turquoise, to pale pink to yellow. Her intent was to design shawls of such a high quality that Osage women would buy them and pass them down as heirlooms. Some would say she has more than succeeded.

“I was named this year by Archie Mason, who took me as his daughter,” O’Keefe said. “He said, ‘My new daughter has done something to change how our women dress and she did it with one thread. I was so proud to see so many new threads around me.’ I was touched by that.”

O’Keefe, who was born and raised in Pawhuska, is the president and sole owner of the Grayhorse Group, Inc., a purchasing and Procurement Company based out of Virginia. The company does business with clientele such as the Four Seasons Hotel in Washington, D.C., the Hempel Hotel in London, and the Ritz Carlton to name a few. It specializes in importing and exporting products from around the world that range from furniture to artwork to bedding to amenities to decorative items. They also have the ability to provide custom products and to direct source from vendors overseas. It’s from access to high quality vendors that she was able to get professional craftsmen and craftswomen to produce the shawls, she said. The shawls are made with semi-precious beads and stones and are beaded by hand. The fringe and colors of the shawls are custom made. To acquire the look of the shadow fringe the fringe had to be hand dipped and the vendor used custom colors. For that effect O’Keefe used a favorite vendor of hers from Mumbai, India.

“I work with some non-profits in D.C. [Washington, D.C.] and I’m always trying to come up with ways to make money,” O’Keefe said. “I’ve actually been reading the articles in the Osage News about the museum’s Osage Ten project and I thought I could help.” O’Keefe partnered with the museum shortly after the Hominy In-Lon-Schka dances to sell the shawls at the museum, with 20 percent of the proceeds going to the Osage Ten project. The shawls range in prices from $475 to $1,560.