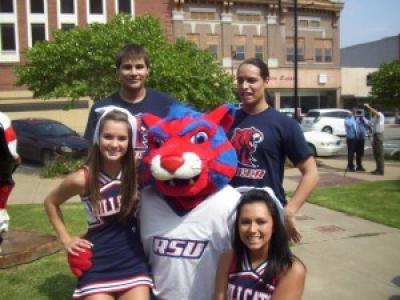 Four Osage tribal members are on this year’s Rogers State University (Okla.) cheerleading squad which will compete in Daytona Beach, Fla. this spring for a national title, and bragging rights. These students will start working on a competition routine after the Christmas break with hopes that their energized team spirit will win high marks from the judges.

“I don’t know if it’s anything like ‘Bring it On’,” sophomore Garrett Irons said of the 2000 film about two high school cheer squads competing for a national championship. “It’s the first time I’ll compete and I’m pretty excited about it.”

Irons and three Osage cheerleaders are among 13 RSU cheerleaders who will perform a 2.5-minute routine at the National Cheerleaders Association Collegiate Cheer and Dance Championship to be held April 7-11. “Hunter the Hillcat,” the school mascot played by another Osage student, will also compete at the Florida event.

Freshman Mary Ramirez, 18, said the RSU squad won a silver partial bid to nationals while she and her cheer colleagues competed during a NCA Cheer Camp this summer.

“I thought it was really neat,” the Hominy High School graduate said of the opportunity to compete against larger schools “that are intimidating” including Texas Tech and St. Mary’s universities. The RSU squad won several awards at the cheer camp held in Lawrence, Kans., including the Spirit Award and placed high in the Game Day and Rally Routine divisional competitions, according to the RSU Hillcats Web site.

Ramirez describes cheerleading as “very dangerous, opposed to what other people may think of it as a sissy sport” because of its routines and stunts which could cause injury if not performed correctly.

Freshman Tori Deal, 18, says she enjoys competition and the adrenaline rush of it. “I may get nervous right before, but then it goes away.”

Deal, who graduated from high school in Keller, Texas, is one of the squad members who performs aerial stunts, also called a flier.

“I hope they catch me,” Deal said when asked what goes through her mind when she is a flier. “But I’m not really nervous, I trust everybody” on the squad.

Irons, 19, is in his third year of cheerleading after getting his start during senior year at Pawhuska High School. Last year, he attended Coffeyville Community College in Kansas, where he also cheered on the school’s squad before transferring to RSU’s Claremore campus.

“I was supported by my family,” Irons said of his decision to pursue cheerleading while at PHS. “I didn’t get much negativity because everyone already knew me,” he said, adding he previously played high school football, tennis and was on the wrestling team.

Irons asked fellow Huskie John Parker if he would try out for the squad.

Parker, a 19-year-old freshman, always wanted to cheer but instead participated in other student activities and sports while he attended PHS. Since being selected for the squad, Parker says he’s been working on improving his moves and routines like his other squad colleagues.

“At that time, I couldn’t do a back handspring, now I can physically do it,” said Parker, adding male cheerleaders do a lot of lifting when working with fliers. Weight lifting is part of cheerleader training for Parker, who adds he is considering yoga exercise “to become more flexible.”

All four cheerleaders and their other colleagues train with their coach Katie Belcher who has worked for Claremore Public School’s cheer teams and was a cheerleader while at the University of Central Oklahoma, whose squad competed at the NCA nationals.

Brian Kirby, a 20-year-old junior, has worn the “Hunter the Hillcat” mascot costume for the past three semesters during school games and squad performances. He is the first RSU team mascot to have a name and describes his role as being a “happy, go-lucky guy.”

“In high school I thought it would be cool to be to be a team mascot,” Kirby said. “I like being at the games up close and personal (with the fans) and I like being with the kids.”

Kirby wears a mascot head that weighs about 10 pounds which he describes as “very light” adding an important part of playing a mascot is to stay hydrated because wearing the costume is “like wearing a coat.”

Like the RSU cheerleaders, Kirby competed at the NCA cheer camp this summer where he won awards including Best All-Around and Best American. He also won a bid to compete at the national championship in Florida and is one of 20 university mascots nationwide competing.

“I’m not real nervous about it,” Kirby said. “I’m going to work hard for it, I’m there to have fun and that’s all that matters.”