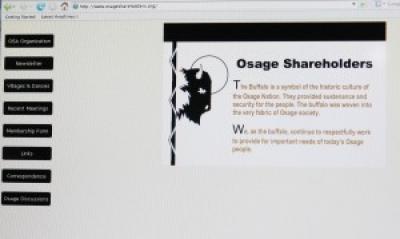 With about four months to go before Osages head to the election polls, tribal members and candidates are sending messages regarding the latest political rumors, news reports and personal observations and opinions on all election-related topics into cyberspace for most to see.

Several people planning to run for the Osage Nation Congress, Minerals Council and for the principal chief and assistant principal chief’s offices have established their own campaign Web sites and/ or use other tribal member-targeted Web sites to communicate with the voters. But those Web sites allowing public feedback and e-mail exchanges have turned into lightning rods for information sharing and heated political debates amongst those following Osage politics.

One of the recent heated online exchanges involved former Oklahoma state representative Scott BigHorse, who plans to run for assistant principal chief, and Jenny Miller who is running for a Congressional seat. BigHorse and Miller shared their concerns about each other last month through e-mails sent to members of the Texas Osage Yahoo! Group.

“Just FYI, Ms. Miller is spreading rumors that I am a (Osage Nation Principal Chief) Jim Gray puppet. For your information I am no one’s puppet,” BigHorse wrote in a Jan. 19 message to the group members. “I read and do my own homework and vote my own mind. For someone to make that kind of statement about me without consulting with me or just asking me straight out where I stand makes that person a little suspicious at best.”

Miller responded to BigHorse’s e-mail on Jan. 23 and made a copy of these two e-mails available on her campaign Web site. “I find it unfortunate that the time has to be taken on what I consider a non-issue,” Miller wrote, adding that BigHorse “is not on my list of issues” but feels she has “no choice but to respond due to Ms. Cass having taken a position on the matter.”

There was no copy of e-mail correspondence from a person identified as Ms. Cass included with BigHorse and Miller’s e-mail copies. The Texas Osage Yahoo! Group does not keep an open message board for group members to see each other’s correspondence like a blog does, so e-mails sent by members including BigHorse and Miller are only sent to other members’ personal e-mail addresses.

Miller, who is an Executive Branch critic, wrote in her e-mail she was skeptical of BigHorse “given that he defended this administration to me…” during an exchange six months ago and she identified BigHorse’s family members who either have ties to Chief Gray or the Minerals Council who have taken political positions she opposes. For example, Miller notes that BigHorse’s father, Minerals Council member Kenneth BigHorse Sr., believes the Osage Minerals Estate belongs to the Nation’s newly-formed government while she believes the Minerals Estate should belong to the shareholders.

“Once again, please keep in mind,” Miller writes. “It was NOT I who brought this to your attention but Scott. Though he has not been an issue previously, he has made himself one now due to his attempt to discredit me.”

“I will not buy into running a negative campaign,” wrote BigHorse, “but it seems that others are doing just that and that is what we do not need to be able to move forward as a Tribe or Nation.”

These e-mail copies on Miller’s Web site are titled: “A Taste of Things to Come?”

In a late development, BigHorse contacted the Osage News Thursday afternoon – the same day this story was posted to the newspaper’s Web site and provided a copy of an e-mail he wrote to Miller in response to her Jan. 23 e-mail.

“Jenny I did not slander you or throw mud at you, the only thing I did was inform people that you are out there using my family name as puppets to JG,” BigHorse wrote. “I have a proven track record as a State Representative probably the only candidate that has experience with a three branch gov't that has been in existence for more than 100 years. I have always stood on my own two feet. I have a full time job supporting my family so I do not have the time to stay up all night thinking of things to write to people, you have now brought my Father's name into this as if he has done something wrong.”

BigHorse continued in his e-mail to defend his positions on the Minerals Estate. Copies of these e-mails can be viewed below.

With the Nation’s election slated for June, concerns about how the polls will operate are becoming regular topics on the Osage Shareholder Association’s blog (launched in 2006) in which tribal members (shareholders or not) and interested parties use it to engage and inform each other. On Feb. 1, for example, an unidentified blogger posted the link to the Election Board’s Web site with the agenda for its Feb. 2 meeting which featured a presentation by two political science college professors who have studied election topics.

“In other words, do we really need another University ‘Project’ putting its stamp of approval, in this case, on our election by doing research that may not be reviewed for accuracy, methodology, nor potential research impact; or peer-reviewed?” asked a blogger identified as “P.S.” The Nation’s election process has been a long-standing hot topic among the OSA bloggers since several out-of-area voters complained about not receiving their absentee ballots in time for the Nation’s 2006 election.

Mary Lee Evans, OSA treasurer and one of several regular blog contributors wrote a Jan. 30 post, “Letter to all Congressman except Kugee,” asking them to “reread the 1906 Act of Congress” in regards to the upcoming Minerals Council election.

“Hope you guys will see to it that the elections are run honestly,” Evans wrote on the OSA blog. “Remember what goes around comes around. and (sic) the people are truly getting fed up with ridiculous actions by Jim Gray and some of the Congress and employees. I certainly am.”

Evans does not specify any “ridiculous actions” for example, but adds “I do not want the Osage Nation to be involved with the Minerals Council election!” No one has responded to this blog entry as of Feb. 3.

Absentee ballot request applications are now available online for the June election on the Election Board’s Web site at www.osagetribe.com and links to the application have been posted by OSA blogging candidates including Miller and Roy St. John, who is running for principal chief.

Miller, who includes her basic profile on her Web site is also posting copies of tribal government-related matters and electronic newsletters written by her and Congressman William “Kugee” Supernaw who writes “Notes to the Nation” via mass e-mail about newsmakers such as the recent Minerals Council trip to Washington D.C.

At least two Yahoo! Groups targeting Osages living in Texas and the Pacific Northwest are being used to allow tribal members in those regions to network and discuss anything related to the tribe.

David Conrad, the Nation’s executive director of government affairs, started the “Pacific Northwest Osages” group last month. Conrad, who previously worked in New Mexico and started a similar networking group for Osages in that state, decided to do the same for the region which covers Washington, Oregon and Idaho.

Conrad lives part-time in Idaho where his wife, of Nez Perce heritage, is from and telecommutes for his job with the Osage Nation.

Nine people have joined the Pacific Northwest Osage group as of Feb. 2 and residents from the Oregon cities of Grants Pass, Ashland and Brookings have spurred group conversations to start networking.

To see messages from the election candidates submitted to the Osage News, go online to www.osagenews.org.