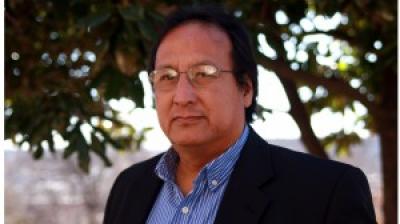 Gray: "I’m running to help heal the wounds this nation has suffered.

Louis Gray has announced his intention to run for the Osage Nation Congress. I’m running to help heal the wounds this nation has suffered. I plan to run this campaign free of pointing fingers at anyone and spend my time concentrating on learning more about Osage needs.

I want to use the Osage Strategic Plan as a guide on many issues to be addressed legislatively. I will also be open to real time problems as they arise.

I want to propose we pass all federal grants out of committee on October 1 of each year to allow them to meet the critical needs of our people. Tribal funds should be addressed at the same time, but it appears those funds are often debated vigorously because they belong to the Nation.

I want to be a part of the effort to turn Tulsa Osage Million Dollar Elm into a first class gaming facility. Through the use of tribal bonds, gaming investment and tribal funds we need to compete and grow at our downtown facility. It is the crown jewel of our gaming facilities and we need to compete with Creek and Cherokee casinos that are building everyday, as we do nothing. That can’t stand.

Support the efforts to improve the delivery of healthcare to all Osages. I will push to make the congress susceptible to the same ethics laws the rest of the government is subject to.

I know many worry the campaign will be dirty and full of unpleasant behavior. I don’t think we have to accept that notion. We can all do better.

If you want a candidate who will hate and fight other congressman, the other branches and the Osage people, then you need to look somewhere else. Now is the time for thoughtful, hard-working lawmakers who are constantly working for ways to improve the lives of our Osage people.

We need to support the preservation of the Osage language and other aspects of our culture. We have made great strides with our world-class program and must continue to bring back the one thing that is uniquely Osage.

My father was on the council when it faced it’s darkest hour and he helped take us off a termination bill. It will take another great effort to progress.

I am a member of the Deer Clan who traditionally serves as the Peacemakers of our tribe. My Osage name is Wah Sha Nompe (Osage whom they fear to see); I was a tail-dancer for 28 years, and now serve my people as a committeeman. I recently joined the Osage Gourd Dance Group.

My favorite activity is spending time with my children and grandchildren. My wife of 7 years is Michelle Vesper Gray. We look forward to serving you, my Osage people. If elected I promise to work to unite our people and remember that I serve the Osage people they don’t serve me. For more information you can find my page Louis Gray for Osage Congress on Facebook.