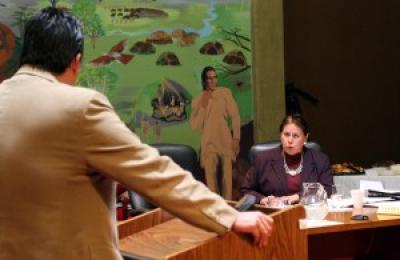 The Bureau of Indian Affairs has declined to help the Osage Minerals Council in running their election in June.

In a letter faxed to OMC Chairman John Henry Mashunkashey Friday from acting BIA Director Michael R. Smith, Smith said that when the Osage Nation formed its own government in 2004 it superseded the election process found in the 1906 Act and the Code of Federal Regulations for the old Osage Tribal Council, something that some on the OMC maintain still exists. Smith also stated that the BIA will give technical assistance with the OMC election but only with the consent of Osage Nation Principal Chief Jim Gray.

“I think the letter that we got was more or less what I anticipated we would get, a turn-down on the initial help for the election,” Mashunkashey said in a phone interview from southern New Mexico. “Basically in the past the technical assistance they provided us with is people that help count the voters, fractional voters . . . that’s all we asked of them and I guess without the chief’s consent they will not help us, but with the chief’s consent they will help us.”

Gray said in a crowded OMC meeting Wednesday that he would do everything in his power to work with the OMC in making sure they have a fair and accurate election and offered to meet with them that afternoon.

“I think the BIA is taking the appropriate steps to support tribal sovereignty and tribal self governance,” Gray said in a phone interview. “When you read the three documents, the Constitution, the 1906 act and the 2004 Reaffirmation Act, you can see that they ruled appropriately.”

During a Feb. 12 OMC meeting Councilwoman Cynthia Boone was voted off the Osage Nation Trust Team and her post as Budget Committee Chair was taken away and given to Councilwoman Jewell Purcell because of two alleged incidents on the controversial trip to Washington, D.C., on Jan. 22. Both incidents were discussed in Executive Session and the members voted 5-3 to remove Boone’s authorities, with one of the No votes coming from Boone herself.

“I do not feel that the punishment was just and I’m concerned at them putting Jewell Purcell as a signatory on the bank account,” Boone said after the Feb. 12 meeting. “I acted in good faith on the part of my constituency.”

In Wednesday’s OMC meeting Boone brought up one of the alleged incidents and said that one of the OMC council members had disrespected her and her husband Tom Boone at a restaurant following the OMC’s meeting with BIA acting director Michael R. Smith in which she allegedly handed Smith a letter and refused to let the other OMC members know what it said. So at the airport, she said that she and her husband in turn disrespected the council member, which turned out to be Councilman Bob Martin.

Martin then went on to say that Boone’s husband Tom threatened him when they were exiting the jetway from the plane, which Boone vehemently denied and Martin said that Boone wouldn’t know because she was still exiting the plane and didn’t see.

Derogatory comments directed at Martin came from Lou Phillips, a regular blogger on the Osage Shareholder’s Association Web site and Boone supporter, who was sitting in the audience. She yelled, “We know the truth Cynthia!” and “How do you think your mother would feel if she knew you were acting like this?” To which a general outcry from the audience erupted to call the meeting over.

Boone then asked Martin what else the OMC was going to do to her because they had already stripped her of all her authority and she said, “You going to kick me off?” in which Martin replied, “Maybe.”

Two audience members however did not agree with Phillips or Boone. Tony Daniels of Fairfax stood up and told Phillips, “I am a shareholder and you do not speak for me.” Phillips approached Daniels and began to berate him in which Martin called her out of order. Assistant Principal Chief candidate Cecelia Tallchief said, “I am Cecelia Tallchief and I have been a shareholder for [54] years and based on the numbers the [OSA] represents . . . they represent less than a tenth [of the shareholders].”

OMC Councilwomen Jewell Purcell and Kathryn Red Corn have developed an OMC election code that follows nearly verbatim the BIA’s Code of Federal Regulations that pertain to the old Tribal Council’s election procedures. The things they changed to the code are substituting Osage Tribal Council with Osage Nation and changed the document to comply with the Osage Constitution, Purcell said.

The OMC will meet with Chief Gray and Osage Nation Congressional Speaker Archie Mason to reach a final decision on the OMC election code sometime this week, promised Gray.

“When I ran four years ago I told them I’d give them the best four years of my health I could give them and physically, to sit up there for any length of time just wears me out,” Mashunkashey said. “I’d rather dance [at the In-Lon-Schka] than sit in the chambers. I don’t get to dance all the way through sometimes but I’d rather dance and put my [Osage] clothes on than sit in those chambers.”