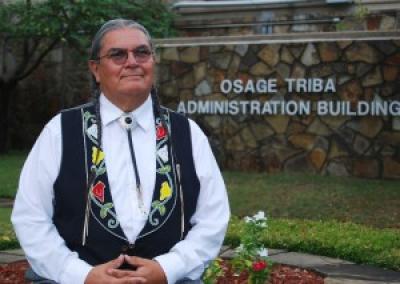 Osage Nation Congress Speaker Archie Mason says he will step down from the Legislative Branch’s top post after the upcoming Hun-Kah Session of Congress ends, meaning another congressperson will soo n be presiding with the crack of a gavel.

“I’ve acknowledged to my colleagues that I’m not going to entertain a (speaker) nomination for the Second Osage Nation Congress,” which takes oath of office following the Nation’s June election, Mason said. He’s held the Speaker post since the Nation’s government was reformed and he was elected to the First Congress in 2006.

“I feel it’s time to step aside and let another person take over. It’s been a positive learning experience for me to see the new government birthed,” Mason said. He issued his announcement to his Congressional colleagues in writing during their 26th Special Session.

Mason says the role of the Speaker is “a good position to be in,” which requires the position holder to be “a good communicator with the Congress and Executive Branch” and “you have to learn to get along with the constituents.”

After the June election, Mason will remain on the Congress until 2012 when his term expires.

“I hope it will be a continued challenge for the Second Congress as well,” Mason said. It’s a healthy learning process,” he said of the Nation settling into the new government’s pace. “Indeed the way we do things are unique (in incorporating the tribe into the reformed government). One of my goals was to help create the legislative infrastructure with this new government and certainly entertain information from my colleagues.”

Mason’s announcement also comes after a contentious debate between the Congress and Executive Branch in setting the Nation’s 2010 budget which extended from the 2009 Tzi-Zho Session into January. He said he’s working on legislation which would help prevent a similar situation from reoccurring.

“I’ve accepted the goods and the bads, the ups and downs which comes with the job and we learn from those experiences as well,” he said.

Mason said he is working with Congressman Raymond Red Corn on a budget process which will “set up guidelines and timelines so things do not repeat. It was not a healthy adventure at all.”

“We hope to have it in a final draft form for Congress to vote on in March,” he said.

The Hun-Kah Session starts in March and lasts 24 days with the Speaker position chosen at the end of its run.