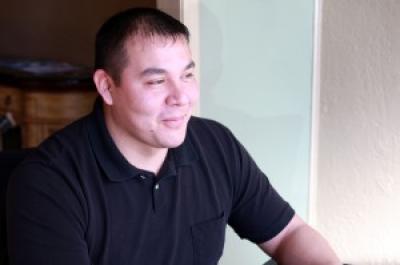 Osage Data General Manager Berbon Hamilton has been named to the Pawhuska Chamber of Commerce board of directors. He will serve a three-year term on the board with eight other members for the chamber which focuses on the area’s business entities and economic development.

Hamilton attended his first chamber meeting as a board member on Feb. 16. As part of his new post, he will join fellow board members who work with 141 area businesses and individuals (both Native and non-Native American) who are chamber members.

“I was excited” he said, adding he believes his board post “could expand my leadership.”

Hamilton, who holds a bachelor’s degree in business administration with an emphasis in management from Haskell Indian Nations University, has been with Osage Data since 2006 and previously worked as an accountant for Osage Enterprise, Inc.

At Osage Data, Hamilton works with nine employees and they work with several business partners in providing information technology solutions. Last year Osage Data became part of the Osage Limited Liability Company which is handling business development opportunities for the Nation and oversees its other revenue-generating entities such as the Gift Shop and the Palace Grocery Store.

“It’s pretty exciting, now we’re trying to do a lot more,” Hamilton said of working with Osage LLC officials including CEO Carol Leese. Hamilton also gets to travel more often and meet with other top business and government officials.

“Before, I didn’t travel anywhere. Now I have to get a whole new wardrobe,” he said with a laugh. As part of the LLC, Hamilton said Osage Data has grown from working with projects obtained through a New Mexico-based company it co-owns to working with five different companies.

Osage Data is one of 13 Native American tribes or Native American-affiliated organizations who are part-owners of Intertribal Information Technology Company, LLC, which is based in Albuquerque. Hamilton sits on the board for the IITC, which was founded in 2003 and focuses on providing Native American communities employment opportunities through data management and technology services to the U.S. Department of Defense.

While working with the IITC, Osage Data workers were responsible for working with military field manuals which had staffers handling as much as 25,000 pages per month, Hamilton said, adding some of the manuals are “as big as a table.”

As part of offering IT services, Osage Data works with computer network systems as well as telephone systems. In the future, Osage Data plans to work with construction management service companies and professional ones which focus on computer programming, Hamilton said.

In working with the Pawhuska chamber, Hamilton said he will be helping with volunteer events this year including the National Indian Taco Championship which is slated for May in downtown Pawhuska. Hamilton was nominated for the chamber’s board by its executive director Mike McCartney who was out of the office for comment before this story was printed.