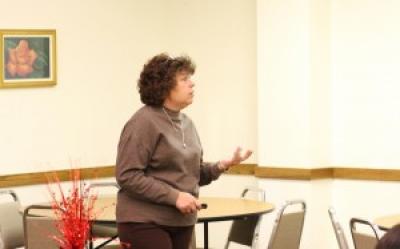 LaVina Clark addressed a crowd during a recent Osage Nation Counseling Center event about dating violence when a cell phone rang several times belonging to a teenage girl seated in the audience.

“You don’t have to respond,” Clark said while standing over the girl’s shoulder and after the phone’s text message alert rang twice in less than a minute. “Who has gotten texts like this over and over and over again from your boyfriend?” asks Clark, who is the counseling center’s domestic violence administrator.

The girl says she is receiving messages from “Mr. Wonderful” who initially texts that “he misses you already,” but later asks “what’s wrong, why haven’t you texted me back yet?” after she fails to reply promptly. Soon “Mr. Wonderful” follows-up with more somber messages including: “Who are you talking to?” and “I guess you don’t love me now.”

This unfolding scene is a make-believe example set up by Counseling Center officials to illustrate what could occur in an abusive dating relationship during its second annual “Girls Night Out” event Feb. 18 in Pawhuska.

This year’s event theme is “He Loves Me, He Loves Me Not” and is being held in accord with February’s designation as National Dating Violence Awareness and Prevention Month. Law enforcement and counseling officials who work cases with domestic/ dating violence involved are advising the public to be aware that newer technologies that are popular among teenagers, like cell phones and Internet social networking sites, can also be used to harass and attack others.

Virginia Elsey, the counseling center’s director, says harassment via text messages can occur on both the male and female’s part in a relationship, which could lead to stalking.

“They push your buttons, that’s what they try to do to get a reaction out of you,” she said of potential abusers.

“Teens are at a high risk for intimate partner violence than adults,” Elsey said adding “females ages 16 to 24 are more vulnerable… than any other age group. One out of five female high school students report being physically or sexually abused by their dating partner.”

Osage County Sheriff’s Deputy Dale Hunter, who also spoke at the event, cited U.S. Department of Justice statistics which report 17.6 percent of U.S. women have survived a completed or attempted rape, of these 21.6 percent were younger than 12 and 32.4 percent were between ages 12 and 17.

Oklahoma State Parks officer Nick Connor, who joined Hunter, noted that online social networking sites, such as Facebook and MySpace, could be dangerous if someone is “friends” with someone who is obsessive. “Those are the worse things ever if stalkers use it to keep track of people.”

Hunter advises the best advice females can follow if they believe they are in danger of being attacked is to leave the situation or “run” because of the physical strength difference between females and males.

Hunter says one reason people should leave a potentially violent situation is because a person may experience an adrenaline rush which could work against the person if he or she doesn’t know how to react.

“The effects of adrenaline can be devastating especially if you’re not prepared for it,” Hunter said adding personal defense techniques can backfire if used improperly or at a slow rate.

If people do choose to carry weapons (mace, Tazers, guns, etc.) for self-defense, Hunter advises people should learn how to use them. “Make sure you know how to use them, especially a gun.”

Teen dating violence not only occurs in physical assault form (hitting, slapping and spitting, for example), but it can also strike victims verbally, emotionally, sexually and even financially where the abuser steals money “in order to control the other person,” said Elsey, a domestic violence survivor who has worked at the counseling center since 2002.

Elsey advises people to be aware of warning signs of a relationship which could become abusive.

The potential abuser may engage in verbal attacks, name-calling and tell the other person “no one else will date you,” she said.

The person may also: blame the victim for a situation; break or hit personal items, check up on the person constantly; isolate the other person from family and friends; be over sensitive (cry and beg to keep the relationship); and show jealousy and possessiveness “so you’re the center of their attention.”

For more information about dating violence visit the Counseling Center’s Web site at www.osagetribe.com/counseling. The center’s 24-hour crisis line can be reached toll-free at (866) 897-4747.