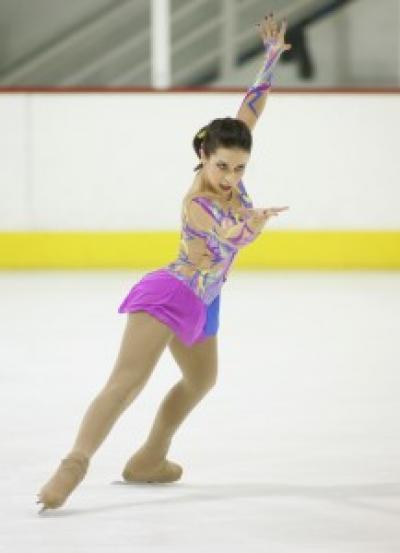 Lindsay Davis spends six days a week on the ice practicing her figure skating routines, which she says demands diligence to compete with other skaters also vying for top honors in the sport. In April, she will have her first chance to compete with the best skaters in the world.

The 17-year-old Osage, who is a Beaumont, Calif., resident, has been skating since age four and now competes in both singles and pairs figure skating categories. Last month, Davis took third place in the junior ladies category at the U.S. Figure Skating Nationals in Spokane, Wash., which makes her eligible to compete and represent the United States at international competitions.

“I was so shocked just because it’s a dream come true to place (in the top three),” said Davis, who has also competed at other national competitions including those in Colorado and New York. “It’s awesome, literally a dream come true.”

Davis’s first shot at international competition will be in April. She is slated to compete in the Gardena Spring Trophy competition in Italy, which will also mark her first trip overseas.

Davis started skating as a kid after her mother, Debbie Davis, who was a recreational skater at the time, introduced Lindsay Davis to the ice at the urging of her skating coach.

“My first coach just bugged me and bugged me to put her on the ice,” Debbie Davis recalls. “I’m so proud of her and all of her hard work and goals are paying off.”

“I got hooked,” Lindsay Davis said of her first time skating.

“I love the thrill of learning new things. Skating is very different from other sports. There’s always something to learn.”

In addition to skating in the singles category, Davis also skates in pairs and together, she and her partner skate for about 90 minutes on her practice days.

Davis plans on competing in the U.S. Nationals competition again next year which will be held in Greensboro, N.C., and will enter both the singles and pairs categories. “It’s going to be interesting this year,” she said of practicing skating routines for the Italy competition and 2011’s Nationals.

Right now Davis is working on her triple jumps including the triple loop, triple salchow and triple loop. The hardest of the jumps performed in figure skating routines – the triple Lutz – is not on Davis’s radar at the moment.

“I still need to learn other jumps first,” she said, adding only a few women have successfully performed a triple Lutz in figure skating history. Davis said she enjoys competing in both categories because of their strengths such as the company and working relationship required in pairs skating and “the freedom of movement” in singles.

Davis is planning on competing at future competitions and if she successfully places high during the next Olympic year, she could be joining the best of the best international skaters when they meet for the 2014 Olympic Games in Russia.

Davis’s Oklahoma ties are through her mother’s family. Debbie Davis is Osage on her father’s side with family members from the Skiatook area.

When she is not skating, Davis has independent school studies through the Beaumont School District and will graduate in May with plans to pursue community college studies when she’s done. She also enjoys spending time at home with her family, which includes both parents, an older brother and two dogs as well as shopping.

“I’m a great budget finder,” Davis said with a laugh.

Debbie Davis says one great thing that’s come from Lindsay’s skating ventures is the family’s opportunities to travel across the country, which has put hundreds of miles on their van. Debbie Davis says it can cost between $25,000 to $35,000 per year to support her daughter’s sport which includes practice time on the ice, coaches, choreography and food and lodging.

“There’s so much that goes into training these kids to get to where they are today,” Debbie Davis said. Anyone interested in helping sponsor Lindsay Davis can get in touch with the New England Amateur Skating Foundation, a nonprofit based in Providence, R.I. which helps amateur skaters pay for their competition expenses.

Lindsay Evans praises her parents and coaches for helping her with her skating activities and achievements. “They’re the foundation for my skating. They’ve sacrificed so much for me – the best I can do is try and make them proud.”