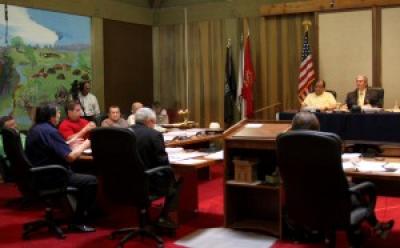 On the last day of the 2010 Hun-Kah Session Thursday, the Osage Nation Congress rescinded last week’s board confirmation votes conducted by secret ballot then voted again – in the open – on all board appointees which resulted in dismissals of George Pease and Elizabeth Lohah Homer from the Gaming Enterprise Board.

Thursday’s votes come eight days after the Congress declined to confirm board members Frank Oberly, Pease and Chairwoman Homer in a secret ballot vote on April 7.

All three gaming board confirmation votes ended with 6-6 tie votes, which left the tie-breaking vote up to Assistant Chief John Red Eagle.

On April 9, Principal Chief Jim Gray resubmitted all three gaming board members to Congress as appointees for confirmation and followed up with an executive message on Monday stating: “The Osage Nation Congress failed to follow the rule of law when they voted by secret ballot on April 7, 2010” and advised them of potential impacts to the Nation’s gaming operations if the gaming board remains vacant.

In his message to Congress dated Monday, Gray said “the Osage Nation Constitution and Osage law mandate that voting be conducted openly and made public by record” before listing potential consequences of not having a gaming board in charge of several duties including managing the Osage Million Dollar Elm Casinos’ finances and operations; authorizing the distributions of gaming revenue to the Nation; and signing payroll checks for the casino employees.

The Congress met with legal counsel in executive session Wednesday but took no action on Gray’s letter after the meeting. All 12 Congress members reconvened for Thursday’s session and acted on motions to vote again on confirmations for the Nation’s Gaming Enterprise, Health and Wellness Advisory Board, Editorial Board, Limited Liability Company Board and alternates for the Election Board.

Congressman Eddy Red Eagle made a motion “to ratify all appointment confirmation votes that were taken during this Hun-Kah Session” on April 7 and April 9. His motion passed with a 7-5 vote with “no” votes from Congressmen Mark Freeman, Raymond Red Corn and Congresswomen Shannon Edwards, Debra Atterberry and Faren Revard Anderson.

Red Corn then made a motion to “rescind all appointment confirmation votes” from April 7 and April 9 and “to expunge those votes from the record.” His motion passed unanimously, which lead to individual confirmation votes of all the appointees with the gaming board votes generating the most discussion when the appointee names were brought up for voting.

“We all know, and whether we want to face the fact or not, we have had an accounting problem ever since we’ve been here. That accounting problem has got somewhat better in probably the last six months… We have been given information that was not always correct and a lot relied on that information,” Congressman Doug Revard said in his list of concerns about the current board.

“When this Congress passed the gaming law that is in place now, I believe that Congress made a mistake and the mistake was having all three board members serve contemporaneously with each other so that when their term of office is up, all three board members are either reconfirmed or they’re let go,” Congresswoman Edwards said. She encouraged the other Congress members to keep at least a majority of the board, adding she’s reviewed gaming board reports and “numbers don’t lie, the gaming enterprise is doing well. Therefore I think it’s critical that we not make wholesale changes at this time.”

After Pease’s dismissal, Edwards addressed the Congress before they voted on Oberly. “He is now a practicing (certified public accountant). He has had many, many experiences with audits.” She also noted Oberly served on the board when the seven-casino venture received “an unqualified audit” during its last audit which is “very important to our gaming operations.” Congress voted the same as they did with Pease, but Oberly’s confirmation passed with Assistant Chief Red Eagle’s tie-breaking “yes” vote, making it a 7-6 vote.

When Homer’s confirmation vote came up, Atterberry said “we all had an opportunity to look at the resume that was sent to us by Elizabeth Homer, we also know the work she’s done in the gaming area and we have a very qualified Osage willing to put forth her time and effort for the betterment of this Nation.”

Homer is a Washington, D.C.-based attorney and founding partner in Homer Law Chartered which focuses on cases concerning Native American issues. She served as vice chairwoman from 1999 to 2002 on the National Indian Gaming Commission, which regulates gaming activities on Indian lands to protect gaming tribes from organized crime or corrupting influences and she’s also served as attorney for the Gaming Enterprise Board before Gray appointed her last November.

Congressman Red Eagle said Homer “has tremendous skills, I’ll grant that, and those skills lay in another area. She’s not had that frontline experience of dealing with 1,000, 2,000 people and all the intricacies of the demands of the marketing concept… She does have other skills that can be of tremendous aide to this Nation.”

Red Corn responded to Revard’s comments about the accounting problems and noted they improved during the time Homer was on the board. “Seeing her resume, it’s very difficult for me to see that we could find anybody more qualified than Ms. Homer.

Edwards referred Congress to a publication on gaming, which Homer contributed to. “Recently a book was published called Sovereign: An Oral History of Indian Gaming in America. She was included as an authority in this book on Indian gaming because she is an authority of Indian gaming… Ms. Homer knows her stuff,” Edwards said.

The vote on Homer’s confirmation repeated with the same pattern as Pease’s in which Congress voted 6-6 with Assistant Chief Red Eagle breaking the tie with a “no” vote.

The Congress met in executive session Wednesday with its legal counsel after the Executive Branch informed the Legislative Branch that voting by secret ballot could be a violation of the Nation’s Open Meetings Act (ONCA 07-53).

A section of the bill calls for the public body holding a meeting to record minutes which must include: “A record or summary of all motions, proposals, resolutions or other matter formally voted upon, the results of the vote and the vote of each member of the body.”

Hepsi Barnett, the Executive Branch’s Chief of Staff, told the Osage News that attorneys for the chief’s office found the law violations after the April 7 secret ballot votes and sent the Congress open records requests asking for the voting records of that day’s session.

Reached by phone after Thursday’s vote, Homer said she was “disappointed with the final outcome” but was pleased with the confirmation votes made publicly. “I’m really glad it was a vote that was taken in the sunshine… I would have been happier if the vote had gone my way and I’m obviously disappointed,” she said. “I think that was a really important precedent to establish and a really important commitment for the Congress to make – that is what accountability in government is all about.”

“I am really glad they kept Frank Oberly,” Homer said, adding there are still concerns about having only one gaming board member to handle the board business alone because it’s not possible to have a quorum. “But I think it’s going to be a whole lot easier to get one appointee instead of three appointees.”

In response to some Congress members’ concerns about the board’s performance, Homer believes “the board has done a good job. I think any objective view of what the board has managed to accomplish in the last year is favorable.”

“We have a profitable gaming operation in a declining economy,” said Homer adding the gaming board has made monthly distributions to the Nation of $2.5 million since she was appointed to the board by Chief Gray in November 2009. “You can’t argue with success.” Chief Gray was out on travel Thursday and could not be reached before this story was posted.

The Congress also rescinded other confirmations made April 7 and April 9 to four other boards and voted publically on those confirmations Thursday.