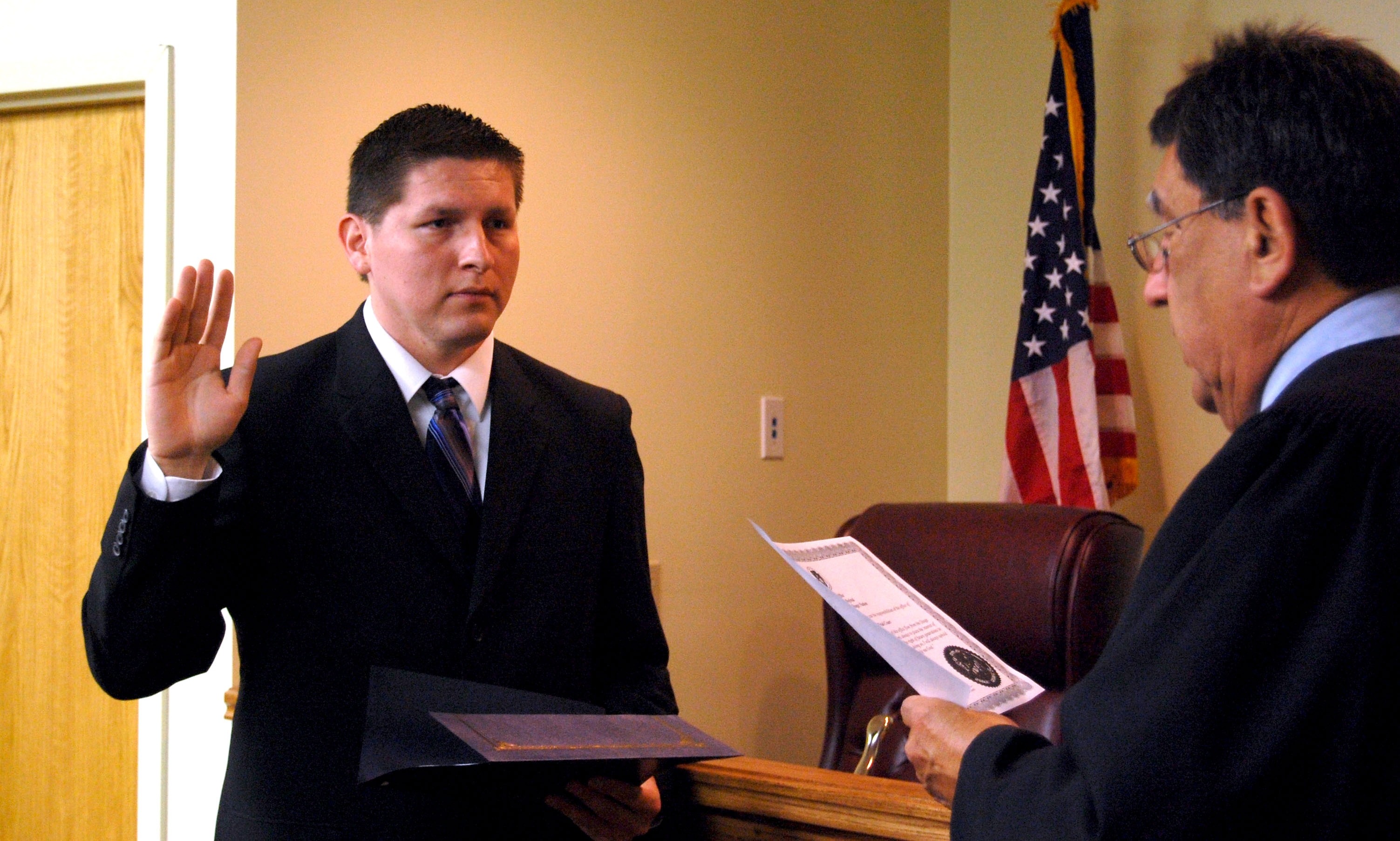 The Osage Congress ended its first Tzi-Zho Session on Oct. 7 with confirmations for the Nation’s second Treasurer and the second Gaming Enterprise Board member. A third board member, an interim appointment made by Principal Chief John Red Eagle, was made last week.

Ten Congress members voted unanimously to confirm Stacey Laskey as a Gaming Enterprise Board member, while William Kemble was confirmed as the Nation’s Treasurer with a 9-1 vote. The Executive Branch forwarded Laskey and Kemble’s names as candidates on the last day of the regular fall session for Congressional consideration.

Kemble’s first day on the job is today (Oct. 18), according to an Executive Branch memorandum issued Oct. 8. He was sworn in by Osage Nation Trial Court Judge Marvin Stepson Monday morning at the tribal courthouse. Kemble replaces John Jech who was appointed as the Nation’s first Treasurer by former Principal Chief Jim Gray when the new government started in 2006 but altogether served the Osage for 15 years in various accounting positions.

Kemble, 27, was assistant financial controller for the Osage Million Dollar Elm Casino, which is a position he’s held since October 2009. He has both a bachelor’s and master’s degree in accounting from Oklahoma State University.

Before working with the MDE, Kemble worked as a staff auditor and in-charge auditor for an independent firm for more than two years, according to his work history provided by the Executive Branch

Kemble and Laskey were interviewed separately on Oct. 7 before their confirmations. Votes were taken by roll call.

Congressman William “Kugee” Supernaw asked Kemble about a recent audit (conducted by an independent firm) of the Nation’s finances in the fiscal year which ended Sept. 30, 2009. The audit, conducted by Bartlesville-based Archambo & Muggenborg, PC, resulted in an “unqualified” opinion of the Nation’s government activities but pointed out findings that need attention – such as a lack of specific policies and procedures and missing material after information requests were made by the auditors. Supernaw asked Kemble if he has experience in government accounting.

Kemble said he held an “in-charge position” for a tribal government while he worked for Cole and Reed for nearly eight months. During that time, “I got to talk with their controller, their treasurer… Also when I was in college, I got to do some fund accounting as well. I think I’m pretty familiar with how the government or fund accounting happens.”

At the MDE, Kemble’s duties included designing, training and directing procedures in a supervisory position for approximately 15 people to ensure the casino complied with the enterprise’s policies, laws and generally-accepted accounting and auditing standards.

When he started at the casino Kemble asked for the previous year’s audit and financial statements and the department’s organizational chart, then focused on setting policies and procedures because “we need to figure out what our processes are – that’s always the first thing that you start out with.”

The audit report was discussed during the Tzi-Zho Session’s last week and was referred to the Congressional Appropriations Committee for further action. The committee’s next meeting is slated for Oct. 26 at 2 p.m.

Standing Bear asked Kemble about the Treasurer’s role in working with the government’s legislative and executive branches and if he would be loyal to one branch more than the other. To be consistent with financial reporting, “you provide financial reporting and financial information to any user of those financial records,” said Kemble, “the executive? I could see them use it, the directors over there? I could see them use it. I can see you folks over here using it. Accounting’s accounting. We try to give you the information needed.”

Congressman Mark Simms asked Kemble what he would do if he saw a violation of law where money is being used for purposes not listed in passed legislation. “Would you have the courage to say ‘no, we can’t pay that out because it’s against a certain bill,’” he asked.

“A big part of being a certified public accountant – which I’m trying to be just as good as every one of them are – is to have the right amount of ethics,” Kemble said. “I am not a stranger to a hard situation in saying ‘hang on a second, have we really considered what we’re doing here?’ Would I have the courage? Yes, I definitely do.”

Congressman Anthony Shackelford asked Kemble about his experience with investments since the Treasurer is also responsible for investing the Nation’s money. Kemble said he was in charge of auditing and analyzing client investments just before he left independent auditing.

Congressman Raymond Red Corn asked Kemble what “specific action” he would take if he was caught in “the proverbial ‘rock and a hard place’” in which he was given a directive which is against general accounting principles. “You can’t violate ethics, if it goes against (general accounting principles), and it goes against a fair presentation of what our financial information is, I've got to stick with my ethics,” Kemble said.

“I must confess that I have my doubts that eight months experience in an auditing situation on a federal program really qualifies anyone of any capability to assume the responsibilities of all aspects of a $46 million operation which is the job you’re applying for,” Red Corn told Kemble. “I need for you to try and help me make that jump – I mean from auditing for eight months in a tribal environment to assuming full total control over something very similar” which includes supervising an accounting staff of 15 at the Osage Nation.

“Looking at it at eight months compared to the three years I’ve had in auditing experience is an approach to look at, but knowing from the other side what we need audited – what this client needs to do to prepare for this audit – that’s almost the intimate details that I know of,” said Kemble, “and knowing exactly what they’re looking for, knowing what they want, I think that gives me a little bit of a beneficial edge… I can walk through the doors of some place and be able to say ‘I know what internal controls they need, I know what reporting they need,’ and I think with a coordinated effort with the team I would be given, I could get us prepared for it.”

Congressman John Free asked Kemble what his plans are in pursuing certified public accountant’s classes to obtain a license. Kemble is not currently a licensed CPA.

“When you’re in public accounting, they work you quite a bit and I really do embrace that kind of challenge,” said Kemble, “I do intend to take my tests and further my progress with my license hopefully very soon, I just need to get that opportunity.”

According to the Osage Constitution, the Nation’s Treasurer does not have to be a licensed CPA.

After the interview questions ceased, Congressman Eddy Red Eagle made a motion for Congress to confirm Kemble as the Nation’s Treasurer. Standing Bear seconded the motion then added he does not see Kemble’s age as an obstacle to holding the position.

“One concern I had expressed to me was the youth of this candidate, Mr. Kemble, and my response to that person was to look at the qualifications in the law,” Standing Bear said, noting the minimum age for someone to hold the Treasurer’s spot is 25. “As far as the law is concerned, age is not an issue because (Kemble) qualifies.”

“By all accounts made publicly and privately, Mr. Kemble is a responsible, intelligent young man of high moral and ethical standing… On questions of education, intelligence and integrity, I was satisfied. My overriding concern was experience,” Red Corn wrote. “Regardless of my vote, I wish Mr. Kemble the best as he assumes these important responsibilities. He deserves the support of both branches to maximize his personal potential and professional success.”

It’s unknown why the Executive Branch did not forward Jech’s name for confirmation along with Kemble’s.

Chris White, the Nation’s executive director for government affairs, told the Osage News: “the procedures for appointing and confirming the Treasurer for the Osage Nation is set forth in the Treasury Bill, as mandated by the Constitution of the Osage Nation.”

After the new tribal government launched in 2006, the First Osage Nation Congress passed ONCA 06-02 (sponsored by Congresswoman Shannon Edwards) which established the Treasury Department. According to the bill, the Treasurer must be at least 25 years old and have never been convicted of a felony. The Treasurer must also have a bachelor’s degree, with a CPA license and degree preferred.

Jech did not reply to an Oct. 19 e-mail seeking comment for this story.

Laskey unanimously confirmed to the Gaming Enterprise Board

Red Corn asked Laskey what the GEB needed to improve as well as what were the strengths of the entity.

Laskey said an area of improvement needed is communication “among all parties.” She said a strength of the board was a “strong management team that is quite highly qualified. I’ve been able to sit down with them for long periods of time… I recognize their strengths in what they bring toward the management.”

Laskey was appointed to the Gaming Enterprise Board in May by former Chief Gray.

According to her resume, Laskey has a bachelor’s degree in accounting from the University of Oklahoma and attended the Burke School of Research. She’s worked for several entities including Dentsply Dental in Tulsa as senior manager in sales and marketing analyzing; a syndicated sales analyst for Dole Packaged Foods Co. in California; manager of the auditing department at the First National Bank and Trust Co. in Ponca City; and as an administrative accountant for the Oklahoma Indian Affairs Commission.

Laskey was unanimously confirmed by 10 “yes” votes from the Congress. She joins Frank Oberly on the Gaming Enterprise Board. Oberly was confirmed to the board during this year’s Hun-Kah Session while the First Osage Nation Congress declined to confirm former board members George Pease and Elizabeth Lohah Homer who were also appointed by former Chief Gray.

Third gaming board member appointed, subject to confirmation next year

On Oct. 12, Principal Chief Red Eagle made the interim appointment of Gene Big Soldier to the third seat on the Gaming Enterprise Board.

Big Soldier will be subject to Congressional confirmation during the 2011 Hun-Kah Session, said Chris White, the Nation’s executive director of governmental affairs. Big Soldier replaces former board member David Conrad who was appointed by Gray. The Executive Branch did not issue Conrad’s name to the Congress for consideration with Laskey’s.

Big Soldier is a member of the Iowa Tribe of Oklahoma and has previously worked with the Seminole and Apache tribes in Oklahoma, White said. Big Soldier served as the Iowa Tribe’s Secretary from 2006 until earlier this year and served one year on the Tonkawa Tribal Gaming Commission starting last year. According to Big Soldier’s professional experience submitted by the Executive Branch, he is a U.S. Army veteran and is the owner and operator of two businesses: Big Time Maintenance Solutions and NDN Biz, LLC.