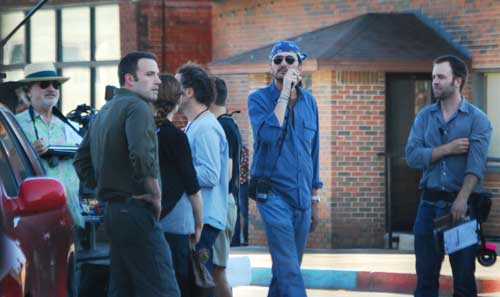 Pawhuskans have been in a frenzy as Hollywood mega-stars Ben Affleck, Javier Bardem and Barry Pepper have been walking the streets of downtown Pawhuska filming for an upcoming and untitled project by director Terrence Malick.

Malick, whose credits include The Thin Red Line, The New World, is famously secretive about his upcoming projects and is said to be the writer as well as the director for the project. Film crews and representatives were tight-lipped as to the film’s plot.

Film crews descended on Bartlesville and Pawhuska at the beginning of October with movie equipment. The crew has shot scenes in the Immaculate Conception Catholic Church in Pawhuska, which features stained glass windows with depictions of Osages, and the historic Triangle Building in downtown Pawhuska.

Mike McCartney, the executive director of the Pawhuska Chamber of Commerce, said Monday that filming wrapped in Pawhuska last week for the most part, but there’s a small chance the film crews could return if needed.

“They’ve shot all the downtown scenes and they stayed a little bit longer than I thought,” McCartney said. “I understand they are complete but if they return, it would be news to me.”

During the filming, local law enforcement officers and private security guards surrounded the perimeters and kept an eye out.

John Patterson, the location director for Redbud Pictures, appeared before the Bartlesville City Council on Oct. 4 and described the movie simply as “The Untitled Terrence Malick Project – we still don’t have a title.” He added the filming would take place in Bartlesville on and off for two months and the movie crew of about 90 is staying in the city during the filming.

Signs of the film shooting were seen as far away as the Highway 60/ 99 intersection north of Pawhuska. A yellow sign with the letters “RB” was posted with arrows leading into town. In parking lots around the sets, signs were set up for crew and extras parking.

In a recent development, thefilmstage.com published this blurb on Oct. 18 after learning Pepper was added to the cast of the movie. “

His character is said to be a priest, as is Bardem’s,” according to the online article. “How this could tie into the ‘romantic drama’ aspect of the story is anybody’s guess, but one could posit some theories as to its role in the film. That’s all for now, but it’s certainly better than the straws we’ve been grasping at looking for details on this movie’s production.”

During the Bartlesville meeting, Patterson did not share details of the movie but describes the filmmakers’ activities. “We’re keeping ourselves small… we usually stay for maybe an hour, maybe 45 minutes and then disappear again, try to pop up someplace else.” “

We hope to keep this process where we move around quite frequently in town, not affecting the town too much while we’re here, having a little bit of a barrier around us… we’ll be here about two months, off and on.”