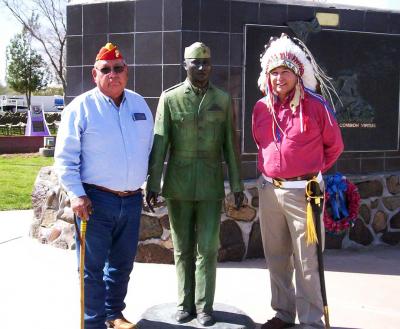 Osage County military veterans are planning to participate in a World War II commemoration this month honoring those soldiers who raised the U.S. flag at Iwo Jima during battle – a moment captured in an award-winning photo shot. The late Marine Cpl. Ira Hamilton Hayes (Pima) participated in the 1945 flag-raising and his tribal community is hosting the commemoration in Arizona.

Vietnam-era Marine John Henry Mashunkashey (Osage) said he and fellow veterans from the Marine Corps League’s Osage Detachment No. 669 and the Harold Bigheart Smalley American Legion Post 198 will attend the ceremony on Feb. 19 in Sacaton, Ariz. on the Gila River Indian Reservation.

This will be the second year area veterans from both military organizations will attend the annual event. Both Native and non-Native Americans participate in the American Legion Post 198 and MCL Osage Detachment activities.

On Feb. 19, veterans from all walks of life are anticipated to attend the 66th annual Iwo Jima Landing and Flag Raising Commemoration hosted by the Sacaton-based Ira H. Hayes American Legion Post 84. The day’s festivities include a parade, military jet flyover, color guard and wreath-laying ceremonies, and a POW/ MIA service, according to the Hayes Post Web site.

The yearly event crowd estimates are about 2,000 people, according to the Gila River Indian News Web site.

The event honors the five Marines and one Navy Corpsman who raised the flag on Mt. Suribachi in February 1945 during the Battle of Iwo Jima. The moment was caught on film by Associated Press news photographer Joseph Rosenthal who won a Pulitzer Prize for the image.