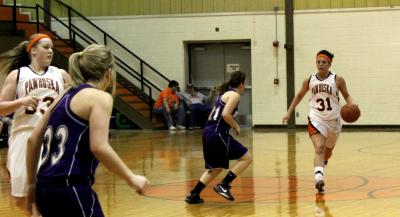 Lady Huskies out score Bucks to win by 26

Defense has been the Pawhuska Lady Huskies’ ammunition all season long.

So when they hosted arch rivals Hominy Lady Bucks last night their weapon didn’t disappoint, giving Pawhuska a 54-28 victory in their last regular-season.

“We’re awfully good defensively. Teams have a hard time scoring. We play what’s called a match-up zone and people have had a hard time scoring against us all year,” Shuck said. “We’re able to get out and run the floor and score on transition, which is a big bonus for us.”

But Pawhuska didn’t look like much of a threat at first.

It was senior appreciation night last night so Shuck found it more important to start all his seniors, even those who don’t regularly start.

Hominy (8-13) came out strong with their shooting game leaving Pawhuska (16-6) trailing 12-8 at the end of the first quarter.

Shuck said his team is strong in every aspect of the game and because of that they are able to score quick on their opponents mistakes.

“Our post play is strong but because of that it allows our perimeter players left open, tonight Katie Malone played real well,” Shuck said. “We’re kind of known for that (big runs) at times, just because of our defensive pressure causing some offense in the other direction.”

Pawhuska senior Sarah Tolson led the Lady Huskies with 17 points, Osage members Katie Malone followed with 14 and Jayde Drummond added 10 of her own.

Hominy had no double-digit scorers.

Pawhuska ran away with the game in the second quarter leading the game 23-14 at the half. The second half of the game was much of the same.

Pawhuska went on a 15-point run in the third that left the Lady Bucks stumped.

Hominy coach Michael Nordquist said his team has had a tough schedule all season long and this game wasn’t any different.

He said his team met Pawhuska at the beginning of the season and lost by 10 points, so he knew his team had their work cut out for them.

“We usually play them twice a year so you got kind of a battle of the Osages,” Nordquist said. “Coming into Pawhuska you got a little bit of a mixture, you got the big size inside that can bang you around and then they got the quickness out front.”

Hominy had a little big of size and quickness but with a fairly young team it was hard for the Class 2A team to match the tough 3A local powerhouse.

Pawhuska is ranked 15th in Class 3A and considered a top contender.

Nordquist said at this point in the season, as teams prepare for district play, it’s important to take things one game at a time.

“We’re trying to get everything together, trying to get our main packages going, so getting prepared for Pawhuska we knew they were strong and I think they’ve been playing as good as about anyone in the state right now in their class,” Nordquist said. “We knew coming in here we were going to have to fight hard.”

The fight isn’t quite over for the Lady Bucks. Hominy drew top-2A team Ripley for their district game this Friday in Hominy at 6:30 p.m.

Ripley is a top 15 team in 2A and if they beat Hominy, Hominy will have lost their chance to move on to the regional tournament. If they win they will play Newkirk Saturday.

Nordquist said it was a tough draw for his team but he’s sure his team can contend.

“If we can take care of the ball and not make turnovers and get (the ball) to our big kids we’ll have a real good shot,” he said. “We’ve had a pretty successful year, you always want to be better as a coach so I think the future’s just going to be super bright with these young ladies.”

Pawhuska will travel to Inola this Saturday for their district game at 6:30 p.m.

Shuck said with a good couple of wins to end the regular season, including the win against Hominy, his team is definitely ready for the post season.

“To win those three games going into playoffs gives us a lot of momentum,” Shuck said. “Inola Saturday, that’s a good match for us . . . we feel real comfortable with that match up, that will be a good one for us to kind of kick it off with.”