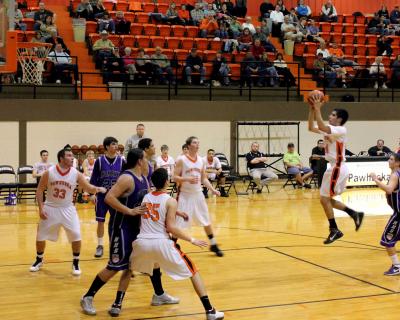 The team has dealt with some unpredictable ups and downs, with injuries and illnesses, but with the district part of the season vastly approaching, things have begun to look up, starting with the 52-43 victory over Hominy last night in the last regular-season game.

Unruh said it was a good way to start district play.

“Everybody’s had to come in and fill a role but now we’re all healthy and I think all those other people getting experience has really helped us, just in time,” Unruh said. “I’m not so sure about tonight but for the most part we play really good defense all year long and it’s allowed us to struggle a little bit on offense and still be in the game.”

But with a 9-point run early in the second quarter the Huskies came out on top to lead 34-25 at the half.

On offense most of the first half belonged to Jamison Cass and Matthew Free, Osage tribal members, who had 10 points a piece at the half.

Pawhuska (13-9) led most of the game and allowed Hominy a number of tries for the win but the Bucks (9-12) just couldn’t finish.

Hominy Head Coach Scott Harmon said with a number of big post players his team tried to work the inside but couldn’t quite connect on the boards.

“That’s what we kind of hang our hat on, as well as offensive rebounds and play good [defense],” Harmon said. “We really try to control the Cass kid and Tyler Weathers, he’s a really good athlete, jumps extremely well and then the other kid (Matthew Free) did a good job. It looks like they’re a pretty little ball club, they do a good job, so we just wanted to come in here and stay vanilla; we didn’t want to show some of the things we were going to use in the district tournament.”

Jamison Cass led Pawhuska with 14 points, Matthew Free followed with 12 and Wade Oller added 10 of his own.

Unruh said his team was able to execute well on turnovers caused by Hominy. He said it was the biggest winning factor of the game.

“We got a lot of easy baskets and transitions, steals, off of rebounds we were able to push, we had a lot of easy buckets and then Jamison Cass was able to hit some 3’s; unfortunately the others were not,” he said.  “And Mathew Free inside was doing what he’s been doing all year.”

Hominy hosts Newkirk on Friday at 8 p.m. for the district game, if they win they move on to a match up with Ripley Saturday at 8 p.m. in Hominy.

Pawhuska will travel to Inola on Saturday and play at 8 p.m. Win or lose the Huskies will get a chance to play in the regional tournament next week.

Unruh said he doesn’t know a lot about Inola but his team will be ready.

“I just watched a little bit of film on them, they’re solid and we’re going to have to play well. I feel good about it,” Unruh said. “We have lapses, lots of lapses where we can go dead for a while, then we feel like OK it’s time to turn on and we do. We just need to stay on all the time.”