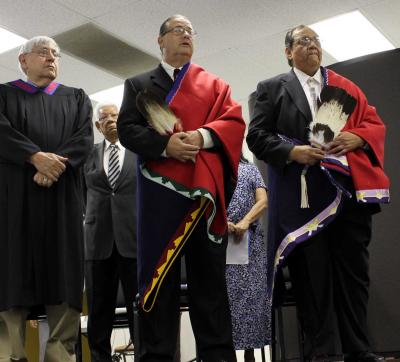 After undergoing a ‘small emergency surgery’ Feb. 24, Principal Chief John Red Eagle is back at work and feeling fine.

“I want to express my sincere appreciation for everyone’s concern and their prayers after hearing that I had a medical problem. Perhaps I alarmed everyone unnecessarily,” Red Eagle said. “Thankfully, it was not serious and I returned to the office today. Again, I want to thank everyone for their prayers.”

Assistant Principal Chief Scott BigHorse announced during the Congressional Special Session Feb. 24 that Red Eagle was to undergo a “small emergency surgery” related to his diabetes and asked for everyone to keep Red Eagle in their prayers.

The Chief’s Office released a statement that said Red Eagle is indeed under a doctor’s care but the situation was not serious and the surgery would be an outpatient procedure.