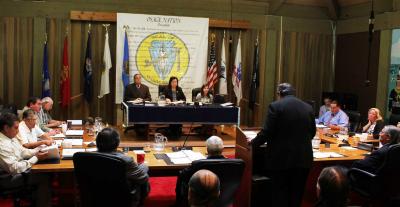 The Second Osage Nation Congress passed five pieces of legislation during the three days it met for the Sixth Special Session while two bills failed and another bill was tabled.

Those bills passing were:

·      ONCA 11-18, which is an amendment to ONCA 10-79 (An Act to Improve Congressional Oversight of the Osage Nation Gaming Enterprise). This amended bill affects the Nation’s Gaming Reform Act (ONCA 07-30). The ONCA 11-18 sponsor is Congressman Geoffrey Standing Bear. It passed with an 11-0 vote on Feb. 24 (Congressman Archie Mason was absent that day) and was signed into law by Principal Chief John Red Eagle the following day.

ONCA 11-18 amends the Gaming Reform Act section on the Gaming Enterprise Board’s authority limitations. ONCA 11-18 is now amended so the gaming board “is not authorized to and shall not waive the Enterprise’s sovereign immunity from suit in any court other than the courts of the Osage Nation without the approval of the Osage Nation Congress by resolution, provided that this provision shall not affect the limited waiver of sovereign immunity up to the limit of the board’s liability policy contained in the Nation’s gaming compact.”

·      ONCA 11-22 is a supplemental appropriation bill to the Housing Department for $32,875 for the Native American Housing Assistance and Self Determination Act program (sponsor is Congressman Eddy Red Eagle).

This bill passed on a 11-0 vote on Feb. 24 (Mason was absent that day) and was signed into law by Chief Red Eagle the next day.

·      ONCA 11-23 appropriates $111,800 for the Nation’s legal expenses in the federal lawsuit against the Oklahoma Tax Commission regarding the reservation’s status (Red Eagle). The case is under consideration for review by the U.S. Supreme Court, so this bill covers legal expenses associated with the High Court brief filing.

The money will go into a litigation fund specifically designated for attorney expenses concerning the lawsuit. The bill passed with a 12-0 vote and was signed by Chief Red Eagle on Feb. 25.

·      ONCA 11-25 is a supplemental appropriation to the Executive Branch for $50,000 for land-into-trust application costs (sponsor is Congressman Raymond Red Corn). The Nation has filed applications to place the lands holding the Osage Million Dollar Elm Casino properties in Tulsa, Skiatook and Ponca City into trust with the U.S. Department of the Interior.

On Feb. 25, the Congress tabled action on ONCA 11-24, which is a bill to amend and provide a supplemental appropriation to the Nation’s Gaming Commission. The bill (sponsor is Standing Bear) was tabled in a Congressional Commerce and Economic Development Committee meeting held Feb. 25 before Congress adjourned.

ONCA 11-24 was tabled after Osage Million Dollar Elm Casino officials raised concerns with the committee that the bill (amended from the original filed) was not the correct one and would cut staff if it passed. More on this issue will come in another Osage News story.

Also not passing were bills calling for changes to the Nation’s merit-based employment system. ONCA 11-20 and 11-21 (both sponsored by Red Eagle) were defeated with 12 “no” votes on Feb. 23.