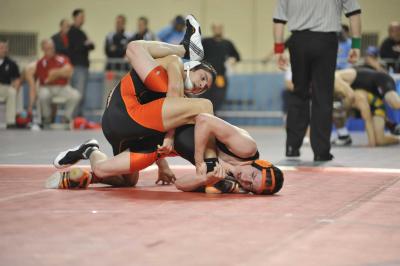 The crowded gym, the loud fans and the intense pressure is exactly what Tyler Frost, Gene Big Soldier and Jeremy Iron have been working toward all season long.

The three Osages qualified for the 3A state-wrestling meet held in Oklahoma City Feb. 25-26.

Tyler Frost, a senior on the team, who has wrestled on the varsity squad for four years, was the only one out of the three who placed.

He said he had hoped for a better placing but was still happy with the result.

“It feels pretty great that I was able to place at the state tournament, it’s just kind of been a dream of mine every since I started wrestling,” Frost said. “I was just glad I could come out on the podium, not go out and not let down when the cards were against me.”

Frost, who was 21-3 in the 152 lbs weight class, met Newcastle junior wrestler C.J. Stalsworth in the first round of the tournament and took a loss.

He said being on the big stage might have shaken him up a little bit.

“The first match I just I didn’t work my stuff, I didn’t take as many shots as what I wanted to and I just kind of got a little nervous the first match,” he said.

Decker was a familiar opponent to Frost, the two met at the regional tournament where Decker defeated Frost by a point.

“I was able to come back and beat him by a point,” Frost said. “I was determined to redeem myself after losing to him at regionals.”

The win advanced Frost to the semi-finals with Mangum senior Seth Yarbrough.

He said he didn’t’ know much about Yarbrough but his determination to keep moving forward got him the win.

“I just knew I had to beat him in order to get onto the podium,” he said.

For the third-place title Frost met Stalsworth, the opponent he lost to in the first round of the tournament but didn’t get a chance to wrestle him.

Stalsworth forfeited due to an injury, giving Frost the automatic victory.

Frost said he was prepared to leave everything on the mat even though he didn’t have to.

“(I just wanted to) win my last match, that would have been my last match had I lost,” he said. “It was good, there was really not much more I could have done, and I’m just kind of glad of the way it turned out.”

For Gene Big Soldier the state tournament was simply a learning experience.

Big Soldier entered the tournament 19-9 in the 140 lbs weight class and met Newkirk senior Joseph Leven who was 30-4.

“It was his last year to wrestle so I knew he was going to be a tough opponent,” Big Soldier said. ““He was tough the whole match, you could tell he really wanted to win.”

Gene said he missed an opportunity or two to get some points on the board and Leven put up a tough fight.

He said by the time he figured out what he needed to do Leven defeated him 5-0.

“I could have hit this one move but when I tried hitting it I slipped off and that’s where he got most of his points at,” Big Soldier said. “If I hit that it probably would have been a closer match, 3-0, 2-1, I just gave up some points.”

The loss moved Big Soldier to the third-place bracket where he met Chandler sophomore Blake Barrier.

Big Soldier said he had the upper hand most of the way but Barrier attacked at the right moment.

It was the first time Big Soldier qualified for the state tournament and in his eyes he put up a good fight.

He said he learned a lot this year and it will only make him better for the next season.

“I was happy I went but I wanted more, I wanted to place, but I still got next year and now I know what I got to do to place next year,” Big Soldier said. “It was a good season. I thought I improved a lot from previous years, I’m ready to start next year up.”

The junior, qualified for the state tournament when he was a sophomore. He made it into the second match of the third-place bracket but his season ended there.

Iron was 24-5 in the 285 lbs weight class and met Newkirk junior Trevor Summitt in the first round.

Summitt was 10-1 and had some muscle and weight on Iron.

Iron said he only blames himself for not using the many opportunities he had to take Summitt down.

“It lasted about six minutes,” Iron said. “I could have taken him down, that’s what I could have done but I didn’t do it.”

Iron said he was on his back and didn’t fight the way he should have, but it’s something he’ll remember for next season.

“I went in and I was just trying to go hard, finish it but I got caught on my back, that’s how it goes,” he said. “I’m going to get bigger and stronger and that’s how it’s going to go.”