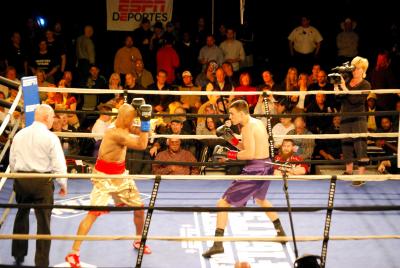 After being knocked down twice South Africa’s Isaac Chilemba came back to win by unanimous decision over Russia’s Maxim Vlasov at ESPN2’s “Friday Night Fights” at the Osage Million Dollar Elm Casino Event Center in Tulsa on Feb. 25.

The match wasn’t the main event but the co-feature, however the match went 10 rounds and was considered the fight of the night.

But 2:33 minutes left in Round 2 the referee stopped the clock calling a technical knockout, giving Burgos the quick win.

That match didn’t last long but the co-feature did.

The match between Chilemba and Vlasov, that went 10 rounds, started in Chilemba’s favor. He out-jabbed Vlasov and had his aggressiveness going for him.

The two found a couple spots and attacked but Vlasov wasn’t able to aim as well as Chilemba. He had the right moves but couldn’t follow through.

After dancing the arena for seven rounds Vlasov got his first knock down with 2:04 left in the 8thround.

Later in the same round Vlasov followed up with another knockdown after a sweep to the left side of Chilemba’s face.

But Chilemba was resilient and got in as many punches as he could.

After a unanimous decision at the end of the 10th round judges ruled in Chilemba’s favor.

After 10 rounds Chilemba came out on top.

In the main event the young Burgos landed a combination that stopped the clock at 2:33 left in the second round and gave him the win by a technical knockout.

The entire event had a total of seven bouts. Friday Night Lights is filmed from various cities throughout the country on ESPN2. It features most weight divisions from boxers worldwide.

Leading to the main event was first the cruiserweight featuring Garret Simon of Puyallup, Washington and Kevin Shepherd of Kansas.

Simon was declared the winner by knockout with 2:32 left in the first round (the bout was four rounds). Simon remains undefeated 5(4)-0(0)-0.

Following the cruiserweight was the light heavyweight division where Warren Walker of Tulsa met Ritchie Cherry of Chicago.

The two exchanged jabs all four rounds and Cherry was declared winner at the end of the fourth round by unanimous decision. Cherry is now 2(1)-1(1)-0.

In the bantamweight division Simpiwe Vetyeka of South Africa defeated Roberto Carlos Leyva of Mexico by knockout with 2:08 left in the third of six rounds.  Vetyeka is now 22(13)-1(0)-0.

After six rounds in the super bantamweight Alex De Oliveira of Brazil was declared the winner by unanimous decision over Robert DaLuz of Rhode Island. Oliveira is now 17(12)-1(1)-0.

Lastly in the light middleweight division Harry Joe Yorgey of Pennsylvania defeated Donovan Castaneda of Missouri. Yorgey won by technical knockout in the fifth of eight rounds. He is now 23(11)-1(1)-1.