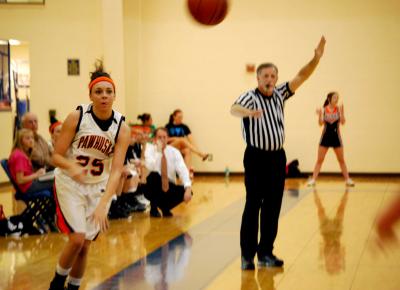 A scoop of confidence and hint of offense is just what the Pawhuska Lady Huskies needed to overcome the well-rounded Salina in the first round of the area tournament.

After a jittery first half the Lady Huskies sealed the 62-59 win over Salina at Burdick Center in Pryor.

Pawhuska advances to the semi finals of the area bracket and meets Adair today at 1:30 p.m. in Pryor.

Pawhuska coach Mark Shuck said once the nerves passed his girls we’re able to play the way they wanted to.

“This group hadn’t been to the area tournament, they walk into a big gym . . . I think it overwhelmed us just a little bit early and once we got are legs under we played a little more like we’re capable of playing in the second half,” Shuck said. “That credit just goes to the . . . All week long we’ve been pretty determined about we got three games to play this weekend and they kind of looked at each other as much as anything I think, and just realized they had a lot more to give than what we’d given them (Salina) that first half, and just came out and just played so much more harder.”

It became obvious in the first half that Salina was a shooting team as they hit four threes and Pawhuska showed their strength underneath the basket.

Shuck said his team was more than prepared for Salina but even they began to slip toward the end of the second quarter.

“I watched 30 hours of tape, watched them (Salina) play about eight different games, on tape, and live, so we knew exactly what was going to come, it’s just tough to cover them, they’ve got so many kids that can shoot, they penetrate they go the big post - I mean we knew it was a huge challenge,” Shuck said. “The first half and the second half defensively we didn’t get much better offensively, we got a little bit more aggressive we just had 18 points at halftime and scored 40 something in the second half.”

Katie Malone shoots a free throw against Salina in the first round of the 3A Area State Tournament in Pryor. Photo by Benny Polacca/Osage News

Things took a wrong turn for Pawhuska early in the second quarter when Salina had a six-point run that led them into their 27-18 lead at the half.

A couple of offensive adjustments at the half and Pawhuska was back in the game.

Pawhuska came out crashing the boards, 18 of their 22 points scored in the third quarter came from within the paint.

Pawhuska didn’t waste any time getting back into the game and trailed by two, 42-40, wrapping up the third quarter.

Shuck said it was exactly what his team needed to do.

“Pushing the ball down the floor, getting some points in transition, doing a better job of getting it to our posts, offensively was our biggest adjustment. First half to second half we just scored the ball a lot better than we had,” he said.  “I think it was just a little bit more confidence, a little more aggressive and just did a real good job in that second half.

Tolson led the Lady Huskies with 27 points and Drummond followed with 14.

The Lady Huskies are ranked No. 12 in class 3A and Adair is ranked No. 4 but Shuck said his team can compete.

“Adair is a team that’s tradition rich up in this area, good basketball team but not any better than the team that we beat today,” he said. “It’s a good match up for us.”