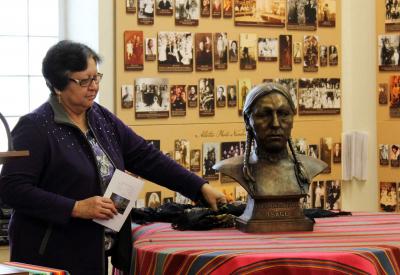 The last memory Mary Blackbird Fish had of her grandfather Fidelis Cole was of him dressing in his Osage clothes, getting ready for the Grayhorse In-Lon-Schka dances.

She was about five years old.

Fish, now 84, attended the bust unveiling of Fidelis Cole at the Osage Tribal Museum Feb. 16 and told the attendees, mostly descendants and relatives of Cole, that her “grandfather Fi” was a good man.

“He never talked much and I always wondered whether he could talk English because was always talking [Osage],” Fish said. “I have good memories about grandpa.”

Cole’s great-grandson, Fidelis Davis, thanked the OTM for making the event possible and that the project was needed for the tribe to revitalize its history and culture.

Recollections of Cole said he was married to a healer and that he and his wife spent a lot of their time gathering medicine and traveling to heal those who called upon them. He was a member of the Native American Church and stayed true to his traditions to his death.

More than 30 people attended the event.

Cole’s bronze-powered bust is the seventh in a series of nine to be unveiled at the museum.The museum has already acquired the busts of Albert Penn, Shun-Ke-Ma-Lo, Charles McDougan, Henry Pratt, William Fletcher, and Ah-Hu-Shin-Kah (Little Wing). The bust of Wa-Xthi-Zhi (Charles Wah-Hre-She) will be unveiled this month, and the bust of Wah-Nah-She-Shin-Ki (Principal Chief Fred Lookout) will be unveiled in April.

The bust of Margaret Dod still needs to be acquired and recently an eleventh bust was found of Margaret Goode, making the project no longer the “Osage Ten.”  The museum plans to acquire Goode’s bust as well. The busts cost around $5,000.

Frank Micka made the original busts in 1912. He visited Pawhuska to acquire plaster face molds for the Anthropology Department at the Smithsonian Institution’s National Museum of Natural History, according to a 2007 Osage News article.

To make the busts, Micka took photographs of the individual’s faces and made molds that depicted their facial features, hair and shoulders. However, of the 10 busts that the Osage museum is acquiring, the busts of Fred Lookout and Shon-Ke-Ma-Lo were not made by Micka.

The busts of Lookout and Shon-Ke-Ma-Lo are probably the result of face molds obtained during an Osage tribal delegation visit to Washington, D.C., in 1904, according to the National Museum of Natural History. The bust of Shon-Ke-Ma-Lo was made by Frank Lemon for an exhibit at the Louisiana Purchase Exposition in 1904.

The museum learned of the busts’ existence in 2004 when the granddaughter of Albert Penn donated his bust to the museum.

The busts have an appearance of being bronze statues but in reality they are plaster copies of the originals and made of resin, mixed with bronze powder and painted to emphasize facial features.