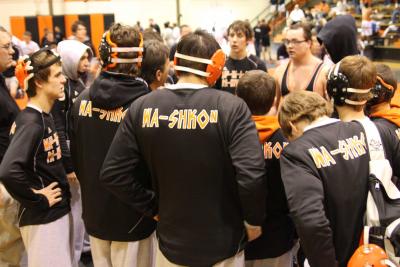 For the last six years the Osage words MAN-KI-A-TSIN PA-HYU-SKA have been splashed on the front of the Pawhuska wrestling team’s T-shirts.

In English the words read “Pawhuska Wrestling” and the back reads WA-SHKON, meaning “Do your best.”

The two phrases in the Osage language and the Osage people themselves have carried the long wrestling tradition at Pawhuska High School.

The program started in 1966 and has been home to hundreds of the toughest Osage and non-Osage wrestlers in the state.

Martin Parks, who has been the head wrestling coach for the last 16 years, said the program has increased the number of Osage wrestlers since its very beginning.

“I think that it has increased, our wrestling program was started by a Native American, Francis Carmen, to me that Indian presence has always been there and Les Carmon, her son, was our first state champion,” Parks said. “I feel that presence was already set but since I started in 1980 I’ve seen a huge increase in Native Americans in our wrestling program and I think it results in a lot of things, just generations of it - plus I’m involved in their culture aspects, I think that helps to.”

Parks, who is Osage, wrestled under Carmen on the very first wrestling team. He said things have definitely changed over the years.

“The wrestling team back then we used cut off blue-jean shorts so it’s come a long way,” Parks laughed.

Since then the high school has its own wrestling room with four full-size mats used by wrestlers of all ages.

Aside from the equipment the team has put themselves on the list of stats for Oklahoma wrestling.

Pawhuska has been home to 18 individual state champions, 112 state placers, 204 state qualifiers and a handful of college All Americans.

The wrestling team has also been home to many Osage In-Lon-Schka Drumkeepers that include: Bruce Cass, Cameron Rumsey, R.E. Yarbrough, Bobby Harris and Matthew Littleton.

Parks said the honors are no secret to the Pawhuskan community as wrestling has continued to thrive.

“I know that basketball was big here in Pawhuska in the 60s and 70s but since the 8os it’s (wrestling has) kind of taken off and dominated,” he said. “They just enjoy that one-on-one aspect of it. I tell them all the time I just think it comes from their bloodline, from their background, the opportunity to face someone one on one.”

This year Parks had 27 wrestlers on his team. They finished 10th in the state but had a young team that returns 14 starters.

He said more than half of his team is made up of Osage wrestlers including senior and third-place state wrestler Tyler Frost, junior Gene Big Soldier and junior Jeremy Iron.

Frost has qualified for the state championship for three years and placed for the first time this year.

He’s wrestled since he was three years old, loves the competitiveness of the sport.

“I just like going out there to test myself,” Frost said. “I don’t have anyone else to blame but myself and I like to see how far I can push myself.”

Frost said he’s aware of the Osage presence in his team’s history and it makes him feel good when he thinks about it.

Parks said Frost is a leader who leads by example. He said he’s never late for practice and always performs at his best.

“I was real glad to see him standing on the podium this year,” Parks said.

He said the individualism of the sport has attracted many wrestlers over the years.

Parks said for the last 16 years his team has received an academic award every year from the Oklahoma Secondary School Activities Association. He added that some of his wrestlers have grown up to be doctors and lawyers.

Iron is a young leader who leads vocally but Big Soldier lead by both example and vocally, when he has to.

Parks said Big Soldier seems quiet but knows when to speak out.

“Gene isn’t afraid to tell you the way it is. He’ll see something wrong and call it out,” Parks said. “Most Native Americans I deal with are usually quiet, don’t really try to stand out but all three of them stand out by example.”

Big Soldier said wrestling gives him the ability to lead and know what it’s like to be counted on.

Parks said that phrase “Do your best” has been instilled in all of his wrestlers since they started wearing the T-shirts in 2005.

At the state championships in 2005 Parks, who had been taking Osage language classes, had the shirts printed for his team and every year since has given the seniors the opportunity to keep them or go back to the English lettering.

“Every year we want to keep the Osage, and one, it’s unique and I don’t care where we go - people come up and want to know what it means and they try to get our kids to trade the shirts, even my wrestlers in college right now they come back with demands from teammates,” Parks said. “It’s been a good positive thing and its good for our Osages, and it brings a little bit of their culture into our program.”