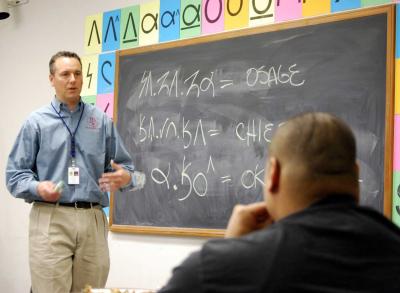 The Osage Nation Language Department has started two initiatives this year in offering daytime language class opportunities for the tribal government employees so they may learn basic Wah-Zha-Zhi words and sentences.

A “Lunch with Language” class is now available each Wednesday at noon through May where the students focus on the Osage symbols (orthography). Earlier this month, the department started an orientation program to introduce the language to the Nation’s government employees.

“We’re not unique in this endeavor to have the employee orientation,” said Rebekah Horsechief, who is an instructor and recruiter for the department. For some other tribes, “it’s actually a requirement to have basic-level understanding, sometimes a beginning I requirement… it’s also an assertion of sovereignty just like our symbols that you see,” she said.

The first employee orientation was held March 2 in Pawhuska where 12 attendees received a history and basic word lesson in the Osage language history. The attendees also received information on other course opportunities offered by the department.

Herman “Mogri” Lookout, the department’s director, said his program’s mission is to “revitalize the Osage language to its purest form” as its teachers work to engage the students in using the language in daily conversations. He also said the tribe’s culture is also a big part of the government.

“When Indians do anything, it’s going to be different, including the way we conduct ourselves under government,” Lookout said in referring to the reformed Osage government launched in 2006. The tribe’s 31st Council created the Language Department before the governing reformation started and Section XVI states the Nation shall protect and promote the tribe’s language, culture and traditions.

Horsechief referred to several signs around the government campus, which lists departments in both English and the Osage language.

Attorney General Jeff Jones is one of the students taking the “Lunch with Language” program, which he is using to brush up on his language skills. A former Pawhuska resident now living in Skiatook, Jones said the timing is a convenience for him to return to the classroom after previously taking classes up to the intermediate level.

“It offers me the chance to learn more about the tribe’s traditions and customs,” said Jones who did not grow up speaking Osage. “I was excited to have the chance to go to a class and the time made it convenient so I could go.”

The class features exercises including repeating the words and practice on writing the symbols, Jones said.

The employee orientation also features basic words and greetings Osages are likely to hear around the Nation including: “Ha:We” (Hello), “Ki-he-kah” (Chief), and “mah-zeh-ska” which is “money” or “everybody’s favorite word,” jokes the department’s principal teacher Billy Proctor.

“Try to get that (Osage) language out there,” Proctor tells the students. “If you want to learn more language there are these classes.”

The Language Department offers classes at its classroom sites in Pawhuska, Hominy, Fairfax, Skiatook and Edmond as well as through other outreach programs. Contact the Language Department for more information at (918) 287-5505 or visit the department’s online site atwww.osagetribe.com/language.