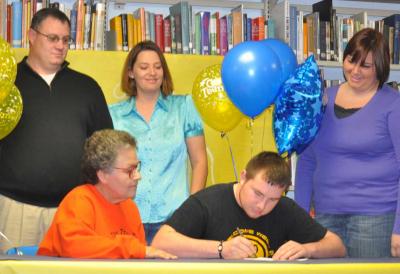 Every Sunday after church, for the past two years, Dillon Gwinn and his family would head to the Pawhuska High School football field to get in some kicking practice.

Dillon’s brother, Justin Sellers, would hold the ball while Dillon practiced his kick, and his mother and other family members would stand behind the field goal catching balls.

“We would, even if it’s during holidays when they didn’t have football, it would be cold outside and he’d grab his bag of footballs and his tee,” Gwinn’s mother Dana Sellers said. “It didn’t make any difference what temperature it was outside.”

It didn’t matter because Dillon’s dream of playing college football and later the NFL would snub the cold, wind and anything else that came along.

It’s that kind of drive that got Gwinn a full-ride football scholarship to Northeastern Oklahoma A&M College in Miami as a punter/kicker.

The Pawhuska senior has played football since he was in the fourth grade.

His older brother Justin Sellers introduced him to the sport and pushed him every step of the way, even when Gwinn didn’t seem too interested.

“I really didn’t think football was going to be big for me because I just liked baseball. But he (Justin) got me to where I liked the game and I went to all kinds of camps,” Gwinn said. “Not much really happened back then because I didn’t really care about it.”

Justin Sellers said his brother always had a football or helmet in his hand when he was younger, even though he wasn’t completely sure about the sport.

Gwinn said over time he became convinced that football was his ticket to success.

“It was probably my brother…I just always went over to his house, watched football, and he always talked to me about it and said that I have the potential to go somewhere, I just pushed myself and he pushed me to go to the weight room and all kinds of stuff to try to go farther,” Gwinn said.

And so he did.

Gwinn has always been the type to work hard, even when he wasn’t asked to.

Sellers said his brother did anything and everything to get better.

“At a young age, 5th or 6th grade, he had that desire to work a little bit harder,” Sellers said. “We’d go out and work his little drills, he never had a quitters mentality, (and) if I told him to stand on his head he’d do it.”

Gwinn worked hard before high school but not as hard as he did during.

Just before his freshman year of high school de decided that kicking and only kicking was what he wanted to do.

“I like to kick a lot, just kicking seemed like it’d be the way to go for me, to get an education, I could go for baseball too but I like kicking” he said.

As a freshman he served as a kicker on the varsity football team. The summer after his freshman year a friend of his brother’s got Gwinn into the former St. Louis Ram’s Josh Brown camp for kickers.

“The way I got good was just going to camps,” Gwinn said.

At the camp he was told that if he was going to make it as a kicker he’d have to change his style from a straight kicker to a side-soccer kick.

So, his sophomore season he changed it up and started the season kicking soccer style.

“I was trying to practice that a little bit during games and I was kicking soccer style but I missed quite a few (kicks) that year too, so I changed back to kicking straight toward the end of the season,” he said.

The end of his sophomore year he spent the entire off-season practicing his soccer kick and attended the former NFL kicker Ray Guy’s kicking camp at Oklahoma State University where he made a big impression.

There, Gwinn was named one of the top 50 kickers at the camp and was invited to a exclusive camp in Kentucky but never made it.

As a junior he was the left guard and kicker for his team. By this time he got down the soccer kick and was given the biggest opportunity of his life.

He was invited to play football in Hawaii and was awarded as one of many top kickers in the country.

“It was real exciting,” he said. “I got to see a lot of stuff, I got to see Pearl Harbor and we played on the Hawaii football field where they play the Pro Bowl.”

It was a good way to kick off his senior year.

As a senior Gwinn was an All-State Kicker in 2A and on Feb. 2, signed with NEO A&M.

The college sought him out after someone sent wind of him to the college kicking coach, and Gwinn asked to visit the school.

He said he didn’t know that the same day was commitment day and he was offered the full-ride scholarship and verbally committed right then and there.

“I was pretty excited sitting there because he said I was going to have a full ride and that really opened up my eyes. We’re not the richest family around and I know my mom would have a hard time to pay for all that stuff,” he said. “My dreams have always been to play in the NFL, kick in the NFL, since I was young and that’s what I’m trying to do.”

This Fall, Dillon will start one of his two dreams as a Norseman, a dream that came true with every Sunday spent on the football field at Pawhuska High School.