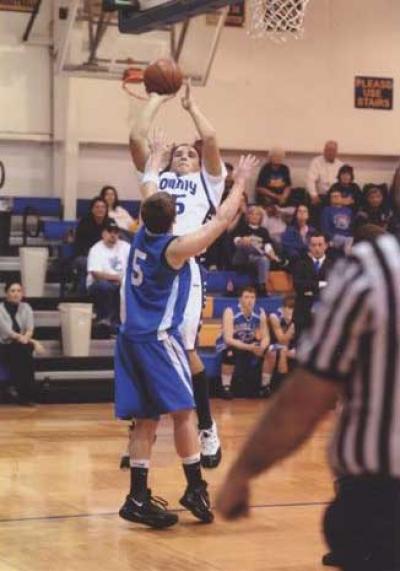 Towering duo finds their place in the paint

When Talon and Cherylyn Satepauhoodle were in the fourth grade they felt the need to play basketball.

They didn’t have to but they couldn’t help but scratch the itch.

“I just felt like I wanted to play basketball really bad,” said Talon.

Talon and Cherylyn, Osage and Kiowa, are juniors and starting centers for the Hominy Bucks basketball teams.

For the last three seasons they have had some big roles taking care of the paint for the Bucks but their basketball journeys started way before that.

While most lengthy kids might have had trouble fitting in due to their height, Talon didn’t.

“I feel grateful for my height, I was never made fun of as a kid,” he said. “(My advantage is) my height and basically how powerful I am, knowing that I am going to go hard until I run out of breath.”

For Cherylyn it was love at first sight.

“I first started playing in fourth grade, I really loved it and my mom took me to the high school basketball games and all the girls and guys watching them play, wanting to play as good as they were,” she said. “I love the competitiveness and just everything about it, it makes me happy. When I’m out there and I’m playing I just feel good, I feel like it’s just natural for me to play... it’s like the court is my medicine.”

Cherylyn also played in summer leagues and tournaments that had her travel out of state, something she continues to do.

Both get their love for basketball and sports from their family especially their mother Lynette Satepauhoodle.

Lynette said her family has a long line of athletes but she never forced her children to participate.

“It’s not surprising at all, it definitely runs in the family, it goes back to when there great-grandma used to play basketball, her shorts were really big and long, I’ve seen a picture of her when she was young but she was very tall, but yes it ran in my family,” Lynette said. “But I’m very proud of them (Talon and Cherylyn) they love to do things I don’t have to push them to do anything. A lot of parents I know have to push their kids into sports, every year I tell them you don’t have to do this if you don’t want to.”

But every year they still do.

Talon is also a football player and track and field athlete for Hominy, the offense and defensive tackle and in track he throws the shot put, disc and runs occasionally.

He said despite what most think, he’s quick and he credits his swiftness to his powwow dancing.

“I’m more physical than what everybody else seems to think (and) I’m quick until I get tired,” he said.

While Talon uses his height every way he can Cherylyn said she’d rather be known for other things.

She also runs track and field and has been quite successful in the sport.

“My coach tells me that I’m very unselfish and I like to pass the ball a lot and I can dribble too. Not only am I a post because I’m tall but I can also be a guard if the coach wanted me to, I can also dribble the ball and shoot a jump shot,” she said.

In track she took second in regional’s last season and qualified for state where she placed 9th overall. Like her brother she runs on occasion.

Raising her children as a single parent Lynette has mastered the art of multitasking.

For nearly eight years she’s traveled to almost every game, transported them to and from every practice and doesn’t regret a single day.

“I love it, I love the business of it when they were in elementary school they both played basketball, softball, I’d be dropping one off at practice and picking another up,” she laughed.

But what she loves more is how involved her children are. The two also have a nine-year-old brother named Amos who has followed in their footsteps.

Talon is an avid powwow dancer and singer. When he’s not busy with school or athletics he can be found at a powwow.

He said he does it more in the summer and wins from time to time.

Cherylyn doesn’t dance as much because she just can’t put down the basketball.

She’s played on the varsity team since her freshman year and has started since she was a sophomore; all as an effort to someday play for the University of Oklahoma and eventually play in the WNBA.

But in case that doesn’t work, when she’s not glued to the basketball court, she’s got her nose in the books.

She maintains a 3.0 GPA so she can someday maybe go to law school.

“Anytime my grades drop it bothers me and I can’t let it go, I have to do something about it, I try to make sure my grades are where I want them,” she said. “I want to be the first Native American woman to sit on the Supreme Court.”

When Lynette Satepauhoodle thinks about her children and all they’ve done so far she can’t help but think about how fortunate she is.

She said her children have learned a lot from athletics just like many of their other family members have.

“I thank God every day for giving me healthy children, there’s a lot of children out there who can’t play sports… and they understand so they try to do their best,” Lynette said. “I’m very proud of them, I know there’s a lot of young kids that are into drugs and alcohol, and they are totally against that, especially my daughter. She’s just really against second-hand smoke. I’m just really proud of them, they haven’t turned down that path.”