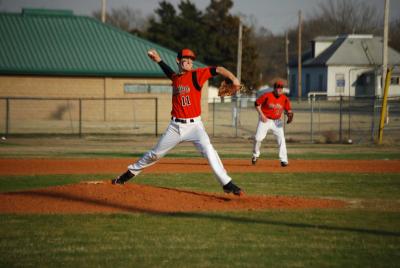 There is nothing like a good surprise early in the season.

With a tough schedule and what looks like will be a tough season, Pawhuska baseball coach Brandon Poteet will take anything he can get from his team.

In an early season game against down-the-road rivals Hominy, the Huskies came out on top with a 12-2 win on March 11.

Poteet said he knew they’d be strong on pitching but that wasn’t quite how they got their win.

“I think it always starts with pitching and we do have five seniors, four of them pitch, and we have a junior that pitches for us, that’s our strength and defense is something else we try to focus on,” Poteet said. “Hitting, I was surprised a little bit today because we really haven’t seen a lot of live pitching.”

But it didn’t look that way.

Hominy led the game 1-0 going into the bottom of the first inning, but with the bases loaded Pawhuska junior Thatcher Taylor batted to right-center field for a three-run play putting the Huskies up 3-1.

Later in the bottom of the fourth, with two runners on base, Pawhuska senior Dillon Gwinn hit a home run to left-center field moving Pawhuska from an 8-1 to 11-1 lead.

Pawhuska finished the game with one more run at the bottom of the fifth to finish the game 12-2.

Poteet said his entire team had a well-rounded game and everyone contributed on both defense and offense, something he expected at the beginning of the season.

“I think we did some good things there, it seems like it was just more than one person, at least everybody had about three at bats and they made connect at least one time, good contact,” he said. “We really try to focus on pitching and defense and I think still without a doubt, pitching, that kind of set the tone, and so if we can keep from scoring that makes it easier. We hit the ball well today and ran the bases well, we did some good things on offense for sure, if we can do that, we’ll have a chance to be good.”

Pawhuska is four games into the season and holds an undefeated 4-0 record.

The Huskies return five returning starters from the last season and have a mix of experienced juniors and seniors.

With a solid lineup, including seven seniors, Poteet said some characteristics of the team have changed this season.

“Last year I thought we were very, very athletic, we had a lot of speed and do some good things at times and [we were] good at offense,” Poteet said, “but winning, pitching and playing defense, I think we have those two components for sure, by April if we’re pitching like we’re capable of we’re going to be pretty solid.”

With most of the team returning from last year Hominy is looking for improvement this season.

“It should be a decentyear for us,” Love said. “We’re still young but we got a little bit of experience.”

When Hominy met Pawhuska they showed more of their youth than their experience.

The Bucks gave a handful of walks, allowing Pawhuska to quickly fill the bases.

Even with senior pitchers like Michale Brown and Channing Tardiss the Bucks weren’t able to stop Pawhuska at bat.

“Pawhuska’s got a pretty good team, they put the ball in play and exposed our weakness on defense,” Love said.

He said last year the team dealt with some injuries and fell apart toward the end. He said once his pitchers get into the groove of things the wins will start coming.

“Our chances this year, we’ll go as far as Tardiss and Brown take us on the hill,” Love said. “Our team motto is get better one day at a time, we don’t look too far ahead.”

For the Woodland Cougars, this season is all about catching up.

With a couple of returning players Woodland coach Brian Edwards has thrown a couple of underclassmen in the mix.

“We have a few veteran players right now, we’ve been playing three to four freshman, we’re really going to be young, those young kids they have to learn how to learn a different pace of play,” Edwards said. “I think what we have to do is we have a lot better defense that’s what’s going to carry us throughout the season.”

On March 12, the Cougars put their defense to the test when they played Pawhuska and loss 5-2, by only three runs.

The loss put Woodland 0-3 in Class A, and it gave the Cougars a touch of encouragement.

“Pawhuska is a really good team,” Edwards said. “It was a big positive play for us, that game gave our kids a little bit of confidence.”

The Cougars have some key players that Edwards is hoping will lead team in the right direction.

“Patrick Bartlett, pitcher and catching, he’s an all-around player leader of the team, Steve Ben, a senior, plays centerfield and is lead off hitter – and Matthew Choate, a junior and pitcher,” he said.