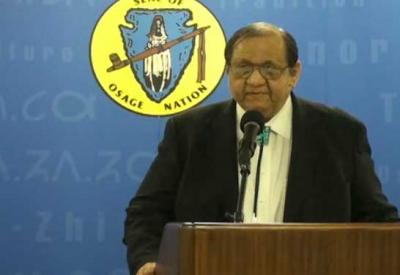 Just a few days ago, Principal Chief John Red Eagle and Assistant Chief Scott BigHorse sat down with the U.S. Solicitor General and staff to tell them the history of the Osage people and its reservation.

“We told that story to [the Solicitor General and staff] and they were moved and they knew that when we walked out of that room, they knew that we had a reservation,” Red Eagle said in his March 11 State of the Nation address at the Wah Zha Zhi Cultural Center. “That a reservation exists here at this nation today, and it will continue to exist.”

In Red Eagle’s first address as chief, he made it clear that his focus would be on winning the two court cases the Nation is currently involved in, which are the reservation status case and the Osage Trust case. The future of the reservation status case rests with the opinion of the Solicitor General to either recommend or not recommend to the U.S. Supreme Court to hear the Nation’s case. That decision will come in May or June, he said.

The Osage Trust case recently won more than $330 million in it’s first phase and will begin it’s second phase sometime this year and Red Eagle hopes to have it settled within a year.

“I believe in the first months of this administration we’ve had tremendous progress in [these two cases]. Every person I’ve talked to about the reservation status case told me it would be denied,” Red Eagle said. “It is my vision we will win these cases and walk away.”

Just roughly six months in office, Red Eagle said his administration has overcome many milestones in a short period of time, such as filing all three land-into-trust applications for the Tulsa, Skiatook and Ponca City casinos; they obtained new counsel for the Nation’s reservation status case and appealed to the U.S. Supreme Court; dropped all lawsuits the Gray administration had filed against the First Osage Nation Congress; saw the start of the Office of Fiscal Performance Review; tightened the Nation’s budgets and is beginning to implement the Merit-based employment system mandated by the Osage Constitution.

“People have turned me into a person whose not doing anything – I move cautiously. Because I don’t make change quickly,” Red Eagle said. “I worked in the workforce for 35 years, I worked as a staff person, as a supervisor as an administrator and every one of my decisions were made over time.

Other points made in Red Eagle’s address:

·      Creating a strong internal structure for the Executive Branch

·      Creating an Osage Tribal Service program which will meld the departments of Communications, Constituent Services, Crisis Assistance and Burial Assistance

·      Updating technology in Accounting and the Information Technology departments

·      Create an Osage Realty Department, to handle the acquisition of land, land-into-trust applications and other land management

·      Complete the construction of the Hominy and Grayhorse chapels

·      Create a financial institution for the Nation

In front of roughly 80 people, Red Eagle finished his address by reiterating his oath to uphold the laws of the Osage Nation and to honor the Osage Constitution. He said that, even though his “heart was back in the old days” with the Osage Tribal Council, change had to come.

“But we have to make changes, we have to grow up, we have to move forward,” he said. “It’s been my determination, my commitment over the years – God first, then family, then nation.”