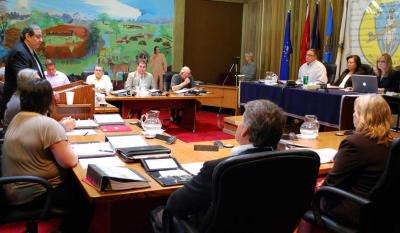 At issue is the Nation’s revised budget parameters act (ONCA 11-32 sponsored by Congressman Raymond Red Corn), which sets rules and limitations for the government entities when setting and spending their operation budgets.

According to his written veto message dated March 28, Chief Red Eagle believes portions of ONCA 11-32 are unconstitutional because the bill would violate the Separation of Powers section of the Osage Constitution.

“The Legislative Branch in this bill presumes to perform the Executive (branch) function of how to budget, organize and operate the government,” wrote Red Eagle. “When a bill establishes ‘policy-stipulations,’ ‘procedural-details,’ and ‘organizational-directives,’ it is an infringement upon the operations of the other branches of our government.”

“The last sentence of the veto override asks for some explanation…” should Congress override the veto, said Congresswoman Shannon Edwards, “My explanation for my self will be that this was discussed and has been discussed thoroughly in various committees and there’s been ample opportunity for give and take and ideas to be presented and suggestions to be made… for myself, these ideas that come in this veto (message) are too late.”

According to ONCA 11-32, a deadline of July 15 has been set for the Nation’s government entities to submit their budgets to Congress for review before the budgets are amended, if necessary, and voted on during the Tzi-Zho Session. The law also allows ON entities that exercise independence (called “Independent Budgets”) to submit their original budget requests to Congress, in addition to the the Executive Branch so the Congress can see their original budget requests.

The Nation’s entities with independent budgets include the Attorney General’s Office and the Osage News.

In the veto message, Red Eagle wrote “Nowhere in the Constitution does that definition (for Independent Budgets) appear… Tribal Enterprise Boards are established in the Executive Branch. Other than the Osage LLC, which exercises independence by law, all Osage Nation entities and instrumentalities are within the Executive Branch and subject to the supreme executive power vested in the Principal Chief… Again, Congress has placed itself into the role of the Principal Chief to make Executive budget decisions.”

Red Eagle also wrote: “Ideally, a budget parameters law should simply set guidelines to the Executive Branch consistent with the policy of the Treasurer, so that it can determine what it needs to do within those guidelines in order to request an appropriation for operating funds to achieve its goals for the fiscal year and to provide service to the Osage people.”

In a prepared statement, Red Corn said he supports overriding the veto because “ONCA 11-32 represents a clear and unambiguous move away from Congressional micromanagement via the budget process. This bill embraces the concept of separation of powers by allowing aggregation of the budget categories to preclude manipulation by Congress.”

The override passed with an 11-0 vote with Congresswoman Alice Goodfox absent during the March 29 vote.