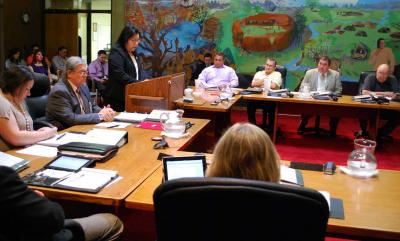 ON Congress to consider changes to the election code

With just over a year to go before the 2012 election, the Second ON Congress is considering a new election code for the Nation during the Hun-Kah Session. The amended code contains changes to the election law for the Principal Chief, Assistant Principal Chief and Congress.

One of those changes includes a requirement for the chief and assistant chief to run on a single ticket as well as revised timelines for elections, primary elections and special elections.

Red Corn has been working with the Nation’s Election Board on changes to the law. Several of the changes are spurred in the wake of the Nation’s 2010 elections – the first elections held after the 2006 government’s start.

According to the bill, “the joint filing of two candidates, one for each Executive position, shall comprise a ticket for the election.”

Red Corn said he supports the single ticket idea for chief and assistant chief to avoid having conflicts between the two elected Executive Branch office holders.

ONCA 11-40 was taken up during the March 31 Congressional Committee on Government Operations meeting where a motion was made to table the bill pending an opinion from the Attorney General’s office on whether the proposed bill conflicts with the Constitution.

The committee unanimously passed the motion, made by Congressman William “Kugee” Supernaw.

In other Election Board developments, the board voted it would not be responsible for holding the 2012 inauguration activities while meeting with Red Corn to go over ONCA 11-40.

Election Board members to be reconfirmed, confirmed by Congress

On April 13, Congress is slated to consider the Election Board appointees, according to Congressional Speaker Jerri Jean Branstetter who informed Chief Red Eagle via letter on March 29.

The Chief’s office is reappointing Shannon Lockett and Walter Hopper to the board. Terry Hazen (Osage) was selected to fill the board’s third seat and is also subject to Congressional confirmation. Former board member Joe Conner was not picked for confirmation.

Congress to consider resolution on setting term limits for the Principal Chief; issue would be put to a vote of the people

Congresswoman Alice Goodfox is sponsoring a resolution, which would send the question of whether the Principal Chief should have term limits to Osage voters during the next election.

Goodfox, who has said she supports term limits, told the Congress “multiple constituents asked me to sponsor this legislation. I urge a ‘yes’ vote to get this resolution out to the people so they can decide whether they want term limits for the office of Principal Chief. Please let the people decide.”

ONCR 11-10 seeks to pose the question to voters, if it passes. According to the resolution, the Principal Chief would be limited to three terms in office if the voters agree.

The question of term limits originally appeared in ONCR 11-06 (also filed by Goodfox), which failed on a 9-2 vote with one absence from Congressman John Free during the March 31 vote. Voting “no” on the resolution were Congressmen Anthony Shackelford and Mark Simms.

ONCR 11-10 was introduced by Goodfox during the April 4 Congressional session and faces a floor vote like its predecessor ONCR 11-06.