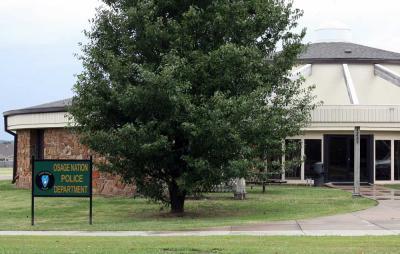 The intent of ONCA 11-43 (sponsored by Raymond Red Corn) is to implement the federal Sex Offender Registration and Notification Act (SORNA) – also known as the Adam Walsh Act and targets people who have been convicted of a sex crime and are mandated to register their whereabouts with law enforcement agencies.

Herbert said he is the contact person for the offender registry and would be taking the registration data from the offenders including fingerprint and DNA samples and would also follow-up with the offenders during their stays on the trust lands.

In a March interview before the Hun-Kah Session, Jones told the Osage News that plans are being made to have Herbert, who has been working on the offender registration legislation with government officials, work out of the AG’s office.

In July 2007, the First Osage Nation Congress passed resolution ONCR 07-12, which states the Nation intends to comply with the Adam Walsh Child and Protection Safety Act, prompting efforts to launch the offender registry. In 2009, the Nation was awarded an implementation grant from the U.S. Department of Justice, Sex Offender Management and Registration and Tracking Office (SMART) to start-up the offender registry.

Since the offender registry started, Jones said 11 people have been identified as offenders living on the trust lands. Jones also said one offender was found residing in a TASC inpatient program.

“It’s already working,” said Jones. “You can’t let (offenders) slip through the cracks because you can’t afford to have more victims.”

According to ONCA 11-43, those offenders who register will be given a “Tier” marking (of One to Three) which is based on the offense(s) he or she is convicted of.

A Tier One offense, as identified in federal law, includes: possession/ receipt of child pornography; video voyeurism of a minor; coercion to engage in prostitution and transmitting information about a minor to further criminal sexual conduct.

Tier Two offenses include: sexual contact with a minor over age 13, whether direct or through the clothing; using minors in prostitution and solicitations; enticing a minor to engage in criminal sexual activity; and producing or distributing child pornography.

Tier Three offenses include: a sex act with another by force or threat; non-parental kidnapping of a minor; a sex act with someone rendered unconscious, involuntarily drugged, or who is incapable of appraising the nature of the conduct or declining to participate; and sexual contact with a minor under age 13.

Those who fail to register as sex offenders face one year in jail and/ or a $5,000 penalty, if convicted. Non-Natives who violate the act may be subject to additional penalties imposed by state or federal governments.

ONCA 11-43 also states that tribal authorities will share offender registration information with other law enforcement agencies, as needed. An employee of the Nation’s government who fails to inform authorities that he/ she is a registered offender, fails to register or fails to keep registration information current may be discharged from employment without notice, according to the bill.

ONCA 11-43 was sent to Chief John Red Eagle’s office for his review and action after the 12-0 Congressional vote.