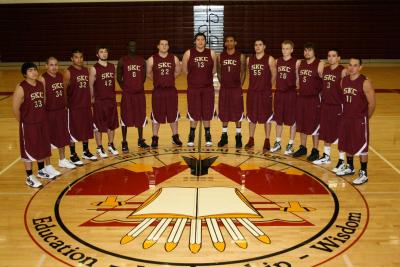 When he was a kid no one believed he could play basketball but it wasn’t enough for him to give it up. When he lost his college basketball scholarship he kept on dribbling. And when the Indian Semi-Pro Team he played on fell through, he held a tight grip.

Eppinette is now in his third year as a post basketball player at Salish Kootenai College in Pablo, Mont.

After years of trying to make it as a basketball player he finally got his break in 2009.

Eppinette, 27, grew up playing basketball with his brother in Hominy. But his sophomore year he moved with his family to Tucson, Ariz., for a better life.

He played at Sabino High School in Tucson and graduated in 2002.

He was given a partial basketball scholarship but played so much basketball that his grades started to slip and he lost his scholarship after two years.

In 2004 he moved back to Arizona and was offered a chance to play in an Indian Semi-Pro Team. But before the team could even get its start the founder ran off to Canada with the money.

It left Eppinette and other players to question themselves; especially his brother Nathaniel Eppinette who decided to quit basketball all together.

“It was hard to watch him let it go, pretty much a heartbreak, he had a lot riding on that     and he loved basketball like I did. That’s who I looked up to as a ball player,” Eppinette said. “It was hard for me to let it go after he taught me everything I know about the game.”

But he did, kind of.

He took a break from basketball and lived in Tucson. He later moved to Albuquerque and again to Washington to be with his children.

“After that I happened to have two children, I didn’t really know where I was going with my life,” Eppinette said.

But in the summer of 2009 J.R. Camel, an assistance coach at SKC, saw Eppinette play in a men’s tournament and quickly relayed the message of a potential post player to SKC head coach Zach Camel.

Camel said he was already impressed just by what J.R. Camel had reported.

“He said he had a lot of good inside game, he was a hard worker and he was a good kid, and that’s what we’re looking for,” Camel said. “He set the mold, I have not been disappointed this whole time from him.”

Eppinette said at the time J.R. Camel saw him playing he hadn’t played very much and weighed 340 lbs.

He said it was a first for him and that his coach said he wasn’t sure he would even make it up and down the court.

In the first year alone Eppinette said he lost over 70 lbs and was able to play 40-minute college games.

“It was really, really tough,” he said. “I was hurting, I was sore, then here I came and like I said I love this game so much I’m willing to do whatever it takes to play it.”

Eppinette has been the team captain for three seasons, maintains a 3.5 GPA or higher in his studies toward a degree in Native American studies and helped his team win their third-in-a-row American Indian Higher Education Consortium championship last month.

Camel said Eppinette has been a positive addition to the team.

He said despite so many let downs Eppinette took advantage of an opportunity that helped both the team and him.

“Here he earned his opportunity to continue to play basketball… I don’t look at his age,” Camel said. “We wanted success and he’s going to be one of our success stories, look at this kid he came in here 25-26, graduated, won a title and went back to help his tribe.”

Eppinette said he’s learned that dreams can come true even if they don’t happen right away. When he looks back on everything he’s been through it’s easy to remember why he held on to the game.

“Just go for your dreams, never give up on your dreams, it can become possible…at my age it’s not common for a guy my age to play with all these young guys but I did it,” he said. “It was always a dream of mine to play basketball, it’s always been my dream, I just could never let it go.”