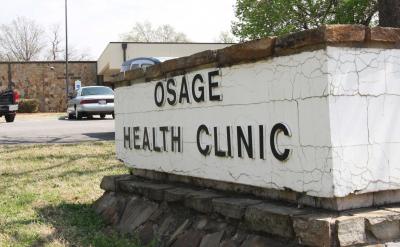 Compacting the clinic would allow the Nation to have more say in decisions regarding the facility’s finances and patient services.

John Daugherty, a retired IHS director for the Oklahoma City Area Office, was hired as a consultant by Principal Chief John Red Eagle’s office last year and has been advising the Chief’s Office on the compacting possibility. Both men appeared before the ON Congressional Committee on Health and Social Services on March 30 to inform Congress of the work and potential plans for compacting.

“We began this process back in the middle of the Gray administration with the Health (and Wellness) Advisory Board.” Chief Red Eagle said. “Chief (Jim) Gray sent a letter of intent to the (IHS) Oklahoma City Area Office in 2009… After my election, we picked up the process again.”

In his presentation to the Congressional committee, Daugherty suggested a compacting “target date” of Oct. 1, which is the start of the 2012 federal government fiscal year cycle, as well as the Nation’s. But the Executive Branch reiterated the idea of compacting is still being considered and a timeline needs to be finalized.

Citing the administration change after the 2010 election, Chief Red Eagle said: “We would like to send another letter of intent to compact and to set a timeline [to show] where we’re at now.”

The Gray administration and the Health and Wellness Advisory Board (established by ONCA 07-59 in 2007) hired consultant Bill Thorne to complete a feasibility study on compacting the IHS clinic last year. In his report dated May 2010, Thorne wrote, “there is no reason not to compact the IHS programs currently resident at the Pawhuska” clinic and recommended changes to the organizational structure to oversee clinic operations, which include creating a governing board.

Daugherty said legislation from a tribe’s governing entity would be needed to establish a governing board for a compacted IHS facility. He also said a self-governance compact requires clean finances for at least three years for the facility.

“In order to compact, you have to have three years of a clean audit,” Daugherty said.

The Health and Wellness Advisory Board noted audit findings at the Pawhuska clinic as recent as 2009 and sought assistance to resolve them. Ron Shaw, M.D., who is chairman of the Health and Wellness Advisory Board, stated during previous board meetings that the audit findings were policy/ procedure-related and were not medical malfeasance-related.

Daugherty said he was working on closing a remaining audit finding for the clinic. He also said IHS officials would be meeting with staff members to inform them of changes and any options employees would have as a result of a decision to compact.

Ron Shaw, who listened to the meeting via phone, said he would prefer the Pawhuska clinic be compacted because the tribe would have more flexibility in spending the funding it receives, especially through “management and (patient insurance billing) collections.”

In the May 2009 edition of the Osage News, Shaw submitted an article stating the Health and Wellness Advisory Board was studying the IHS compacting issue. Shaw wrote the Nation would receive IHS funding “in one lump sum payment on the first day of the fiscal year with only a minimal yearly reporting requirement. This could then allow us as a Nation… to augment services as we see fit. In turn, we could see increases in third party payments (from improved billing practices that we as a Nation put into place)…”

In the IHS compacting feasibility study, Thorne’s recommendation of a governing board make-up includes: the administrative head of the organization, two representatives from the Executive Branch, one representative from Congress and the facility’s Chief Medical Officer.

Congressman Geoffrey Standing Bear asked when Congress would consider the issue of establishing the clinic’s governing body if a decision is made to compact the clinic by Oct. 1. “We are going to have a need for this to debate and discuss, do you know when we’re going to have a chance to look at it?”

Chris White, executive director of governmental affairs for Chief Red Eagle’s office, reiterated the event is an informational meeting and a final decision to compact hasn’t been made.

The Nation’s governing entities would also have to make any necessary changes to the Health and Wellness Division legislation passed by the First ON Congress (ONCA 07-63). The bill calls for the division to be established in the Executive Branch and should consist of a medical/ clinical services department; behavioral/ mental health department; and a health promotion and disease prevention department. ONCA 07-63 also calls for a Division leader and department directors, but does not include language for a governing body if the Nation compacts the Pawhuska IHS clinic.