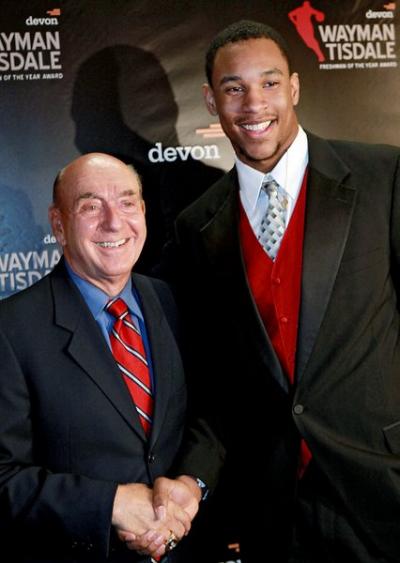 Tisdale was a three-time All-American basketball player at the University of Oklahoma. Following a stint on the 1984 U.S. Olympic basketball team, he played 12 seasons in the NBA before retiring in 1997 to focus on a full-time jazz music career, according to a prepared release.

The phrase “Diaper Dandy” was made famous by Vitale when he used it to describe college freshman basketball talent.

Congressman Anthony Shackelford said the purpose of the trip was to show support for the Tisdale Foundation in hopes that the foundation will consider bringing the awards to Tulsa and hosting it annually at the Osage Event Center. If this were to occur he said the Nation could erect a statue of Tisdale near the north Tulsa MDE casino in hopes of boosting casino profits.

Shackelford also said that the MDE is in talks with former OU football star Billy Simms to put one of his successful barbeque restaurants in the north Tulsa MDE casino. Currently there is not a Billy Simms Barbeque restaurant in north Tulsa. However, Cornelius said it is just a concept at this time and the MDE hasn’t actively pursued Simms yet.

“This would be a great opportunity for us to get in on the ground floor of a national award that will go on during our kids lifetimes,” Shackelford said. “I think it’s going to be nothing but positive comment on us for this.”

Cornelius said the idea of obtaining the Tisdale awards ceremony is new to him but he’s not opposed to the concept. In fact, he loves the idea but the MDE would need to upgrade the event center to host an awards ceremony of that caliber.

“We would like to expand and put together a whole operation here that makes sense in the future,” Cornelius said. In terms of attending the Tisdale fundraiser, he said, “It was very nice to be apart of a very positive event, very upbeat, I think that for future consideration that was a great event. It definitely drew out a lot of high profile people.”

Congressman Anthony Shackelford posted his thoughts about the awards on his Facebook page after the event.

The Chief’s Office did not return comment by the time this story was published.