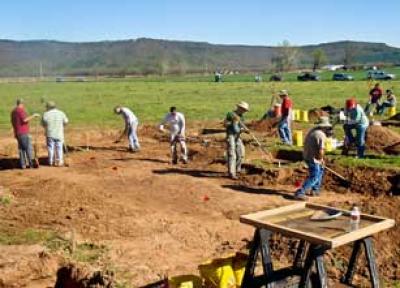 It was the late 19th Century when tenant farmers in the Carden Bottoms of Northwest Arkansas dropped their shovels for thin metal probes.

The Arkansas River began to erode, people were hungry and farmers were desperate.

The riverbanks moved and cut their way into the graves of ancient Native people, exposing remains and what would later be the lives of the ancient Osage, Quapaw and Caddo people.

The farmers were encouraged by commercial artifact dealers to dig near the riverbanks for pottery vessels that freed them from poverty.

Today, Archeologists like George Sabo, professor of archeology at the University of Arkansas, occupy the Carden Bottoms in search of something more valuable than the commercial artifacts found decades ago.

For about a year now, Sabo and about 20 volunteers and archeologists are searching for information. Information they hope will lead them to a better understanding of the people that once occupied the Carden Bottoms.

“[While digging up housing formations] we can identify the ancestors of the modern Osage, Quapaw and Caddo,” Sabo said. “At the site at this point we have certain answers but we’re pretty hopeful that we’ll be able to shed some light on the relationship of the people living down here with the modern descended communities.”

From years of research and documentation by early archeologists, Sabo and his team were able to learn about the three tribes that were connected to the Carden Bottoms.

Sabo said in the 1920s the exhuming of ancient burial sites reached its height and commercial artifact dealers sold the potteries to private collectors.

Others made their way into museums nation wide. The University of Arkansas currently has the largest collection with about 600 vessels, half of them are from the area and housed at the Gilcrease Museum in Tulsa. The National Museum of American Indian in Washington, D.C., has another 300.

In the 1930s the University of Arkansas conducted it’s first excavation project near Little Rock, Ark., where they found pots that eventually led to the type of research Sabo and his team found a deep interest in.

“Vessels from all three of those areas were found in single graves, so that piqued archeologist’s curiosity to figure out what kind of cultural interaction would result in people barring their dead, with pottery from these different traditions,” Sabo said.

Additional sites were later found in the 1950s but looters made their way into burial sites before archeologists could.

In the 1970s and 1980s archeologists began examining the hundreds of pots and the focus on the Carden Bottoms withered.

But Sabo and his crew knew there was something there.

“We were trying to understand how the rock art related to other archeological materials in their region,” he said. “We were able to confirm a direct link between the rock art production and the decorations on a lot of the pottery that comes from the Carden Bottoms area.”

And later a directed link to the Osage, Quapaw and Caddo people was found. The designs on the pottery proved a direct link to all three tribes.

Sabo said the rock art showed that the people living in the Carden Bottoms area who produced the pottery were interacting with neighbors who conducted rituals in the mountains that led to the rock art.

Over a year and half ago Sabo and his team designed another project where he and his team returned to the Carden Bottoms for something a little bit different.

“We decided to do it using electronic remote sensing equipment to identify residential areas of places people went to try to find house features and association trash deposits so we could excavate those,” he said. “And get more information about the people responsible for the burials and all of the pots and the rock art and look at what kind of house architecture they had – try to identify who was living in the houses.”

Sabo and his team also decided to get people from all three tribes involved. He said they invited the Osage, Quapaw and Caddo people to take part in the excavations.

She said the office of the historic preservation has always reached out to local universities for archeological projects.

“It’s a really exciting project, we jumped on immediately and said we wanted to be a part of that,” Hunter said. “It’s really pretty exciting.”

Hunter said the three-year project had three phases; museum work where participants look at the pottery in museums, the fieldwork and finally the analysis phase.

For the last two years the office of historical preservation has invited members of the Osage Nation to take part in the excavation, all expenses paid.

So far a handful of members have made use of the opportunity.

In the week of April 4-8, Osages Trini Haddon, her sister Trona Wells and Martin Miles took part in one of the weeklong excavations.

The three took part in the digging, surveying and the documenting of the excavation.

Haddon said in the beginning she wasn’t sure what she was getting herself into when she signed up, but she was glad she did.

“To me its just interesting to know how people lived thousands of years ago . . . ” she said. “Even if it turns out not to be Osage people who lived here I’m still glad to be out here and to be a part of this. It was a great experience.”

The two excavations in April led to yet another finding of a housing structure of the people that once occupied the Carden Bottoms.

Hunter said inviting Osage participants into the project has advanced the study of anthropology and archeology.

She said it’s important to include Native people in the process of finding the history of their people.

“It’s important that it exists at all in the academic world,” she said. “This is really important on a larger scale, it allows that Native Voice, we’re going to be apart of interpreting the past, it’s not just the scientist looking at the past.”

She said it’s important for the Osage people to know their history and the origins and to some day pass that on to younger generations.

“I hope that we continue to work on projects like this,” she said. “To get Osage anthropologists and archeologists staffing this whole office so that it’s all Osages that are in here to preserve our past.”

To view photos from the Carden Bottoms Excavation view the Osage News Photostream at http://www.flickr.com//photos/osagenews/show/