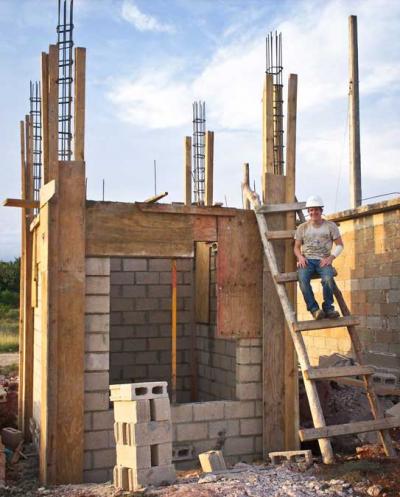 Five days a week, eight hours a day, for more than two years, Studie Red Corn sat in a cubical, plugging numbers into spreadsheets and laying out piping systems.

Three years later the Osage civil engineer is spending weeks at a time in the Dominican Republic helping build a clean water system with the Engineers Without Borders Kansas City chapter.

Red Corn, 24, graduated from the University of Kansas in 2008 with a bachelor’s degree in civil engineering and landed a job with CDM in Kansas City, a national engineering firm.

He said he always knew the mundane work was a part of the job but even then something always seemed to be missing.

“I did a lot of mechanical work and that was challenging and that was hard in its own way but we were totally removed from the human aspect,” Red Corn said. “That actual interaction and how the system affects people, I think that’s something that I wanted to get better at, something I wanted to know more.”

Red Corn’s latest trip to the Dominican Republic was for two and a half weeks in May. There he and a team of professionals worked together to build a 20-foot high, 8 by 8 feet concrete tower that will support a 9-foot high water tank that will provide clean water for the Haitians living in bateys (rural villages).

He was a part of the organization as a student but had never traveled until his first trip to the Dominican Republic with EWB-Kansas City in 2009.

He made his first trip with a group of professional engineers from the EWB Kansas City chapter that was asked to team up with the Dominican Republic Medical Partnership and the Jean Luc Phanord Foundation, a small church-based group in the Dominican. The Partnership and Foundation had already been working with the Haitians on various projects but wanted EWB-Kansas City to help them with their clean water initiative.

On the first visit the teams worked in an area called Kilometer 6, a “shanty town” where Haitians lived while they found better work in the city. There, Red Corn and fellow engineers took water samples and learned about the necessities needed by the Haitians living there.

Red Corn said it was a new and eye-opening experience for him.

“I went into engineering to solve problems, environmental problems, water and sanitation is the direct effect that those environmental problems have on people, people aren’t drinking clean water, that affects their day-to-day life…” he said. “It’s things we pretty much take for granted, we pay for it (water) through our taxes and all those sorts of things in the United States, we pay for clean water and sanitation but we’re so far removed from it that it’s so easy to take it for granted.”

His second visit to the Dominican was more hands-on. Red Corn said they spent the majority of the time there doing a lot of manual labor.

They mixed cement by hand and were able to build the tower in the two and a half weeks they were there.

As a child Red Corn said he was always interested in environmental issues and knew he wanted a career solving them.

He said he went into college knowing what he wanted to study.

“I was a little bit of an environmentalist, I’ve always kind of been,” he confessed. “When I looked at who solved environmental problems it’s really engineers, engineers are the ones who design things to be more energy efficient, the ones who design things to work better, last longer. Maybe they don’t design cities but they design how cities work.”

But even being an environmentalist at an early age didn’t prepare Red Corn for international adventures he later embarked.

He never saw himself traveling internationally for his job because there are no engineering programs that offered such opportunities, with the exception of Engineers Without Borders.

Red Corn said often times he and many other engineers are caught up in the “engineering” of a lot a projects and tend to forget the mortal aspect.

“That’s something I really enjoy about Engineers Without Borders…basically you apply fundamental engineering techniques to solve problems which you directly see the benefits of and improve peoples quality of life,” he said. “It’s (EWB) forced me to address the more human factors of engineering, which is good, it’s challenged me in that respect.”

Although Red Corn is still getting to know the human aspect of his profession some close to him find that he is more capable than he thinks.

Reid Vilbig, a friend and fellow Engineers Without Boarders colleague, said Red Corn has a knack for humanitarian work, specifically with EWB.

“Studie’s really kept the group together with his determination, and his hard work definitely made the project a success especially in the beginning. He helped a lot keeping things organized and moving,” Vilbig said. “He was one of the hardest workers, he really helped especially with a lot of the younger students.

Red Corn no longer works for the engineering firm and is currently in the process of deciding which graduate school he would like to attend.

In the mean time he said he will continue to work where he can and offer his help to future Engineers Without Borders projects.

“It’s the simple reward of helping people that’s great, it’s helping people, it’s helping the environment, there’s an international experience, a whole different culture in the way of doing things. It’s hard not to learn anything from that or to look at the world any differently,” he said. “I think it’s very important that we as engineers design with how people interact with it in life and I don’t think it happens much in that respect but I think I’ve gotten a lot out of it.”