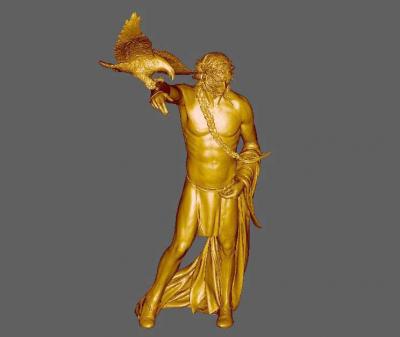 The Osage Limited Liability Company is saying it “cannot accept” the $2.5 million appropriation for participating in “The American” statue project, according to a letter sent to Osage Nation government officials who approved the funding.

The LLC’s response excuses the entity from investing and purchasing land for the proposed bronze statue of a Native American warrior with an eagle perched on his arm. “The American” would stand at a proposed height of 217 feet – about 60 feet taller than the Statue of Liberty. A parcel of land in Osage County northwest of Tulsa is one potential location previously identified for the statue.

In a letter dated June 20, the LLC’s board of directors told the ON Congress and Principal Chief John Red Eagle it would not accept the $2.5 million approved by a majority Congressional vote on April 15 and signed by Chief Red Eagle. Last month, the LLC said it would do a feasibility study on the project before making a decision, but efforts to hire an independent firm to conduct the study were unsuccessful.

“Since Chief Red Eagle signed that bill into law,” the letter states, “the LLC has sought to commission a formal due diligence analysis of the project… It has been difficult to find a firm willing to conduct such an analysis and that mere fact gives us pause. It is also now apparent upon review of the material prepared to date that we will certainly be unable to make the commercial case for LLC’s participating in the (statue) project.”

Once Chief Red Eagle signed the $2.5 million appropriation bill (ONCA 11-63) on April 21, a 60-day window of opportunity opened for the LLC to accept or decline the money. The June deadline prompted the LLC’s formal response.

In a June 22 written statement, LLC board Chairman Chuck Maker described the project as one “with a risk profile well above where we can afford to be at this stage of our growth. Finally, this project is well outside our strategic scope.”

According to ONCA 11-63, the LLC was not mandated to take the $2.5 million, which included $1.5 million designated for real property purchase and $1 million for investment purchases for the project. The bill passed on a 7-4 Congressional vote.

It’s unknown how the LLC’s response will affect the timeline and planning for the statue project.

Osage sculptor Shan Gray is identified as the artist working on the project and its chief executive officer is Keith Bright, according to the statue project’s Web site. Neither Gray nor Bright responded to Osage News requests for comment once the LLC’s decision was made public.

At a planned 217 feet, the American statue is described as “the tallest, free-standing bronze monument in the world that visitors can enter and ascend to a viewing area near the top,” according to the statue project’s Web site.

Several Northeastern Oklahoma media outlets have reported on the project since the early 2000s, with earlier projected building completion dates that have since passed. A 2009 Urban Tulsa Weekly story reported the project budget as between $35 million to $40 million.

Founded in 2008, the LLC is the Nation’s entity for handling business/ economic development activities which are separate from tribal government affairs and are non-gaming affiliated. The LLC’s operations are mostly funded through Congressional appropriations, which have been approved since the entity’s start. The most recent appropriation of $5 million (ONCA 11-61) to the LLC was approved on April 15 with an 8-4 Congressional vote.

Maker’s statement concluded: “The LLC takes seriously the mandate the Osage Nation Congress has given us to diversify the Nation’s economic foundation and to serve as stewards over the capital entrusted to us and we look forward to continuing conversations with the Congress about those goals.”