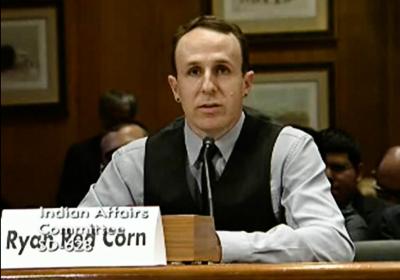 When Hawaiian Senator Daniel Akaka asked Ryan Red Corn what does the United Nation’s Declaration on the Rights of Indigenous Peoples mean to him, Red Corn replied, “It means there’s hope.”

“This [UN] declaration protects [our culture], it says that it’s important, it protects alternative ways of farming, behaving, respect, all that protocol is embedded in a way we conduct ourselves,” Red Corn said. “It’s the very fabric that holds us together. In that respect I fully respect this [document]."

Red Corn, having produced two videos with the group “1491s” on Native issues that went viral on YouTube, was asked to be among the eight Native American scholars, attorneys and experts testifying to the U.S. Senate Committee on Indian Affairs June 9 in Washington D.C.

The senate hearing explored the UN’s declaration as an international policy goal to which the U.S. is signatory. The current existing domestic policy achieves the declaration’s goals, and additional domestic policy considerations to make the U.S. a world leader in indigenous rights and implementation of the UN declaration, according to the U.S. Senate Committee on Indian Affairs Web site.

The UN declaration was endorsed by President Obama in December 2010.

The senate hearing began with a viewing of Red Corn’s “Smiling Indians,” a video produced by the “1491s” in response to the stereotype that Native Americans are always stoic and serious, as portrayed in photos by famed 1800s photographer Edward Curtis.

Three panels were scheduled, with Principal Deputy Assistant Secretary of Indian Affairs Donald “Del” Laverdure testifying first on the position of the U.S. Department of the Interior on the UN declaration.

Red Corn, on the second panel, was joined by Robert Coulter, Executive Director for the Indian Law Resource Center; James Anaya, Special Rapporteur on the Rights of Indigenous Peoples for the United Nations; and Lindsay Robertson, Faculty Director of the American Indian Law and Policy Center at the University of Oklahoma.

Before Red Corn’s panel began the senate committee showed his latest video, “Geronimo E-KIA, a poem by the 1491s.” Produced by Red Corn and his friend Dallas Goldtooth, Dakota/Navajo.

Once the video was over the room erupted in applause.

The video is in response to the use of “Geronimo” by the U.S. government when giving a code name to the terrorist Osama Bin Laden during the mission that killed him. Bin Laden is arguably one of the most infamous terrorists in U.S. history.

The video’s participants tell the stories of Native Americans living all over the country as productive citizens of their communities. The U.S. government’s use of the name “Geronimo” as a code name for Bin Laden only helps perpetuate the negative stereotype that Native Americans are enemies of the U.S. government. The video’s message, and popularity, is what landed Red Corn on the panel.

“I was prepared for a hostile environment but instead you met a very cool atmosphere,” Red Corn said. “My speech was centered on that anticipation. But when I got in there it wasn’t like that. I had to rework my words to fit the environment I found myself in. A lot of people in there were young, younger than me."

Red Corn, 32, said that it was “shoulder-to-shoulder” Native American professionals and interns from all over the country, there to listen to the panel’s positions.

Wearing his father’s Red-and-Blue broadcloth blanket (his father is Osage Congressman Raymond Red Corn) and clutching his eagle fan, Red Corn found himself speaking from the heart after his nervousness caused him to forget his prepared speech. It paid off.

Sen. Akaka asked to have a one-on-one meeting with Red Corn the next day.

“It was cool, it was only supposed to be 15 minutes, but it ran over that,” Red Corn said. “We visited on how it was when he was a kid, change in temperament on holding on to your culture, on assimilation. He’s a big advocate on helping people become prideful of who they are."

Red Corn said Sen. Akaka reminded him of his grandfather, Raymond Red Corn I, and that it was evident by the treatment of his staff that he was greatly respected, Red Corn said.

Incidentally, his grandfather, Raymond Red Corn I, was on the 1924 Osage delegation to Washington that asked the federal government to step in and bring justice during the Osage Reign of Terror.

“When [Sen. Akaka] came in to the hearing he shook everybody’s hands, the staffers and witnesses,” he said. “The meetings he’s scheduled before show his commitment to culture."

Once Red Corn’s panel began and the video was shown, Coulter, Anaya and Robertson spoke on property rights, legislation that affects Native Americans, education, global policies that affect Indigenous peoples and how these issues should be represented in the UN’s declaration.

Red Corn spoke on what the conditions are like for those living on their actual reservations. He said that his next-door neighbors in the Osage Pawhuska Indian Village are drug dealers and have been raided numerous times but continue to sell drugs because the power to prosecute on Indian land resides with the federal government.

The drug dealing going on in the Pawhuska Indian Village would be alarming for anyone, he said, but he and his wife are concerned for their one-year-old daughter who will grow up there. Red Corn said he would like to see the UN declaration “have some teeth” so that its effects can be felt in the most remote of reservations.

He said that by giving each tribal nation the power to solve its own problems, to prosecute its own criminals –would be a step in the right direction.

“The federal government has little interest in rooting out this type of behavior in my neighborhood,” he said.

The first to say he is no expert, Red Corn told the senate committee that he doesn’t get out of Pawhuska that much.

But the Internet and making people laugh is proving to be a useful tool for Red Corn and the “1491s” when getting Native American youth involved. He said the work done promoting Indigenous Rights in his grandfather and father’s time has evolved to appeal to a multi-media based generation.

Many of the videos produced by the “1491s” are Native comedy sketches.

“As far as reaching the youth, there is relatively no media that is being created, that is able to access their minds,” he said. “We’re in a different era of assimilation/ acculturation, there is more than one threat to replace our culture, to pull [children’s] attention away.”

For example he said Native youth have the choice to either go to ceremony, or to Six Flags Amusement Park, stay home and play video games, or just be on their Facebook pages. In creating accessible media to youth that touch on Indigenous issues it helps spread the conversations needed.

“Thank you, Mr. Red Corn and I want to tell you again Thank You for the clips and what you’re doing with young people – and to get to them and attract their attention, as well to these issues,” Akaka said. “I’m sure [the panel’s efforts] will bring about a lot of comment which we can probably use to make the kind of changes that are needed [to the UN declaration].”