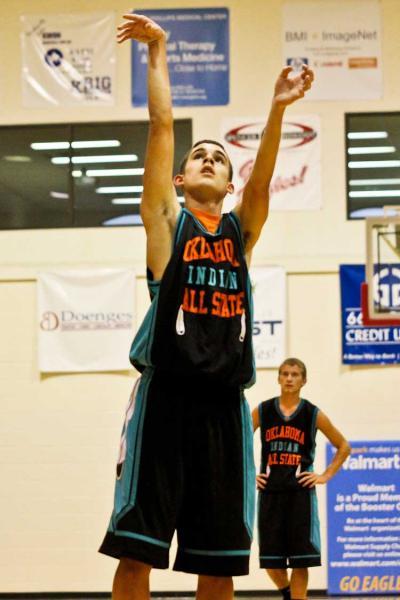 It was early May when Kylie Johnson’s mobile phone rang as she made her way out the door of a drug store.

“I was speechless, I wanted to cry,” she said. “I was a little worried about not making it for All-State and then my dream just came true.”

It’s a dream to most of the 48 players who are selected to play in the Indian All-State games held at Wesleyan University in Bartlesville.

Johnson, of Fairfax, was the only Osage female basketball player selected for the girl’s team of 24 players, 12 north players and 12 south players. Ben Goodeagle, Fairfax, and Matthew Free, Pawhuska, were the only two Osage boys selected for the boy’s team.

The three took part in the weekend events held at the college.

Kylie was part of the winning North team that won the game 81-79 by a last second shot.

Goodeagle and Free’s North team lost 110-81 to the South team.

Dr. Joe Conner, Osage, and his wife Dr. Carol Conner founded the Indian All-State teams in 1996. They founded the teams through their organizational and community psychology research firm Paradox Consulting.

Joe Conner said the selection process has been the same for the last 15 years.

He said the players are nominated by their basketball coaches and compete against other players in their north or south regions of the state.

He said the selection process has always been difficult but is fair. College coaches from out of state look at each player’s stats and make a collective decision.

“It’s one of these tricky things you don’t want to have 10-12 girls who are 5-feet-3 or 10-12 who are 6-feet tall,” he said. “There’s lots of excellent players out there, competition is really stiff, for both boys and girls, all said and done the girls this year I thought was a much better game than it’s been the last couple years or so.”

The players arrived on campus June 17. They settled into dorms, practiced, were recognized at an evening banquet and listened to a motivational speech from Choctaw Nation Assistant Chief Gary Batton.

On Saturday, June 18, the players attended a morning workshop about life after high school and got one more practice in before the games started at 6 p.m.

Conner said it was important to note the players are also academic all-state athletes. He said a large focus of the organization is on education.

He said a lot of the students get to know each other and often find they will be attending the same colleges.

“We know how difficult it is for incoming freshman to survive school especially Native kids, we know the rate of success is not too good, that’s one of the reasons we do this is to build a support network for them amongst their peers,” he said. “It really has happened over the years, a lot of these kids have found one another, at some college campus and they needed that and we’re proud of that.”

Conner said the athletes also learn that they represented Native Americans everywhere, not just the tribes they come from.

He said it’s important for them to know that they represent a mass.

“They may think they’re only representing their schools or family, maybe their tribe or something but since it says Indian All-State out front, they need to be putting the best foot forward for Indians all across the state,” he said. “We ask them to consider that while they are here.”

Johnson said she understands the importance of representing all Native Americans but coming from a small tribe she can’t help but be specific.

“Knowing that I’m representing a whole tribe by myself, it’s amazing,” she said.