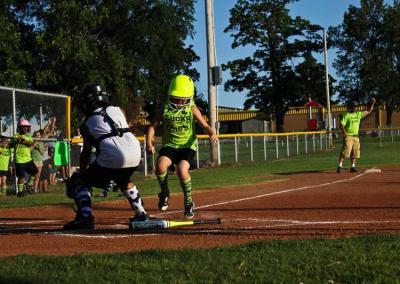 Softball is about a lot of things.

But for four Osage girls and their coach the last three months of coach-pitch softball has been about the last six games.

The Lucky Ones, an 8-and-under softball team out of Pawhuska, had a rough start to their season but won six straight games in the end-of-the season tournament and won their first championship, 11-10 and the if-game, 9-7 on June 22.

RJ Walker, Osage, the coach of the team said it was a nice way to end the ping-pong season they’ve had.

“We had a slow start,” Walker said. “It’s amazing how much better they’ve gotten from our very first practice and very first game to right now.”

The team is a part of the Tri-County Youth Sports coach-pitch, 8-and-under softball league and started practicing at the beginning of April.

They started their season losing a couple of games by one or two points.

They finished the regular season 3-6 and entered the tournament low in the standings and lost the first game. Last year the team placed second in the championship game.

Walker said even though the team wasn’t in good standings he knew they still had a chance.

But to the team of 13 players, including the four Osages; Bobbi Walker, Jordan Nelson-Spicer, Jacie Edwards and Mini Edwards, winning is only but a small focus of the game.

Walker said the girls are mostly there to have fun and make friends.

‘”At this age half the time they don’t even know if they’ve won or not, “ he said. “We (parents) always do, by the time they (the kids) get in the car they’ve forgotten all about it whether it was a win or a loss.”

Walker said going into the if-game the team was excited just knowing they would get a trophy, regardless of the outcome.

He said like the kids, winning to him is a small factor when it comes to the game. He added that it’s more about what the kids learn.

“All I want is to teach them how to lose properly, how to win properly, what sportsmanship is and relying on other people,” he said. “Basically taking care of your responsibilities and they understand that.”

Daisy Spicer, a parent of Osage player Jordan Nelson-Spicer, said she signed her daughter up three years ago to give her more extracurricular opportunities.

“I want her to be able to have that opportunity to play when she gets older so we want to teach her now,” she said. “They learn teamwork, team building, character and also just getting to learn the game of softball, that’s one of the bigger sports that’s offered in our little area.”

After four years of tee-ball, coach-pitch softball proves to be working for the 7-year-old Spicer.

She said she’s met a lot of new friends and has learned how to be a better softball player.

“(I like) that you get to make people come home when you hit and tagging out the girls and getting them out,” she said.

Walker’s oldest daughter is also on the team, Bobbi Walker. He said it was because of her he started coaching in the first place.

He said he enjoys being a part of something that makes his children happy but more importantly all the children on his team happy.

“From a coaching standpoint I can see it on their faces when I see them at the grocery store, anywhere around town, it’s pretty neat to see the glow in their eyes when they see me,” he said.