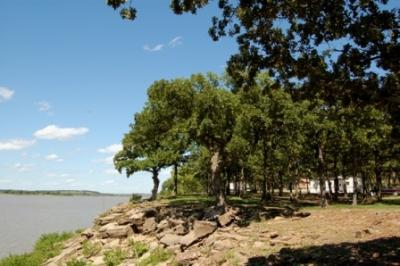 The Osage Nation Executive Branch is announcing its plans to assume control of the Wah-Sha-She State Park near Copan, which is subject to approval of the Second ON Congress.

ON government officials conducted a feasibility assessment of the 1,100-acre park after learning it was on the park closure list due to state government budget cuts. Wah-Sha-She State Park in northeastern Osage County is one of seven park facilities selected for closure on Aug. 15, according to the state Tourism and Recreation Department.

“The Osage people have made it clear that one of their priorities is to expand and improve water recreation on the reservation, including swimming, boating, camping and fishing,” Red Eagle said in a July 12 statement.  “This one step enables the Osage Nation to begin realizing that goal.”

The state’s Tourism and Recreation Department plans to transfer control of the park to the Nation after the Labor Day holiday, according to Chief Red Eagle’s statement.

Located off State Highway 10, Wah-Sha-She State Park is on the southern shores of Lake Hulah about 26 miles northeast of Pawhuska. The lake’s name is derived from the Osage word for “eagle.” The park and lake provide camping, picnic areas, swimming, boating and fishing opportunities for those who make recreation visits to the area.

“Chief Red Eagle and his staff take seriously the commitment and realize the action necessary to assume responsibility for the park,” said Chris White who is executive director of governmental affairs for Chief Red Eagle’s office. “We believe it is the right thing to do.  The move begins to address a segment of the 25-year strategic plan expressed by tribal members.”

According to the Nation’s 25-year strategic plan developed one year after the reformed 2006 government’s start, one strategy identified is for the Nation to “be opportunistic in identifying expanded or new ways to leverage our natural resources,” which includes “self-management of natural resources” as a priority/ initiative.

White also adds: “Parks and recreation have three values that make them essential services to the communities. Those are: economic value, health and environmental benefits, and social importance.”

“I want to thank the Osage Nation for its generosity and leadership,” Snodgrass said in a statement. “I extend my gratitude to the tribe for its commitment and diligence.”

It’s unknown when the ON Congress will consider legislative items, including a budget, to support the park’s operations. In the meantime, White said meetings are being planned to prepare for the park’s transfer of operations.

“We are in the process of scheduling follow-up meetings with the Oklahoma Department of Tourism and Recreation to facilitate the change to provide maintenance and upkeep of the property at Hulah Lake.” White said. “The property is actually owned by the U.S. Army Corps of Engineers, so additional meetings between Corps representatives and Osage Nation are being scheduled to develop various agreements in conjunction with the Nation assuming responsibility for the park.”

The Second ON Congress sent a list of inquiries to Chief Red Eagle about the park transfer. He replied in writing on July 27.

If the transfer is approved, the Nation will sign a lease with the U.S. Army Corps of Engineers, which could last up to five years, according to Red Eagle’s response letter to Congress. Operational costs, including liability insurance, are being researched before budgeting costs are set, according to the letter.

Chief Red Eagle said affected ON tribal government directors have begun assessing needs and creating a budget for the ON Congress members’ consideration.

“Being a good neighbor, whether it is with the State of Oklahoma or nearby local and county governments, was a priority of mine when I took office last year,” Chief Red Eagle stated.  “This is just one example of how I plan to deliver on that promise.”