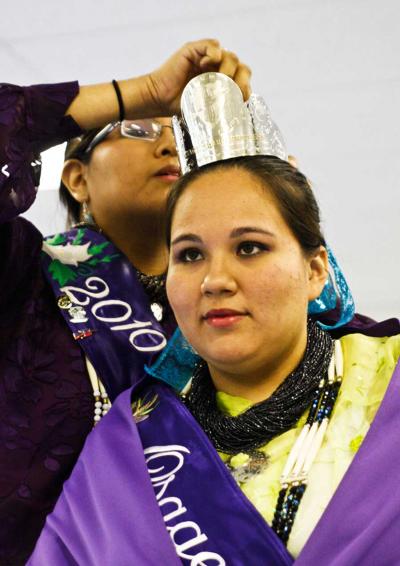 Williams, who will be a Pawhuska High School senior this fall, was crowned by outgoing 2010 Osage Tribal Princess Vanessa Moore at the reception. More than 60 people turned out for the event at the Wah-Zha-Zhi Cultural Center.

“Thank you all for coming,” Moore told the crowd, “Being Osage Princess has been a wonderful experience for me. I know the incoming princess, Dora, will do a great job.”

Williams will be the official ambassador of the Nation at many events across the country and at home. The Osage Princess is asked to attend as many dances and special events as she can to represent the Nation.

“I’m glad that you all came to experience this moment with me,” Williams said, “I will represent my people to the best of my ability.”

Williams, of Pawhuska,will represent the Osage Nation at the American Indian Exposition in Anadarko (Aug. 1-6) – a tradition that has been going since 1941. Williams will now join the ranks of the Osage Tribal Princess Sorority, made up of former Osage princesses that host a popular contest powwow every year.

A benefit handgame for Williams will be held at 2 p.m. Sunday July 24 at Wakon Iron Community Center in the Pawhuska Indian Village.

The proceeds from this event will be used to help send Williams to the American Indian Expo.