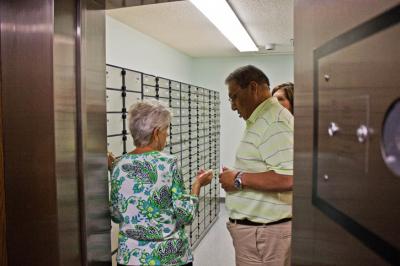 The Osage Nation Election Board voted unanimously to destroy the hundreds of paper ballots cast in the July 2010 runoff election for the top two Executive Branch offices. On July 25, those 2,000-plus ballots were shredded after being retrieved from the Pawhuska bank safe where they were stored.

The three-member board voted unanimously to destroy the ballots during its scheduled 1 p.m. meeting that day at the Election Board office on Kihekah. Once board Chairman Walter Hopper and fellow board members Shannon Lockett and Terry Hazen approved the motion, efforts to retrieve the ballots for shredding started.

Hopper said: “it’s in our law, the law states we have to destroy the ballots at least one year after the election.” According to the Nation’s election code, the Election Board “shall store the ballots in such a manner that will ensure safekeeping of said ballots for a period of one year.”

The paper ballots, along with two CDs with election-related data on them were retrieved from the vault’s metal rectangular box where they were stored. The ballots were then emptied onto a cardboard box and carried to the Election Office by ONPD Officer Derek Shaw, while Lockett recorded the shredding process at the bank with a video camera when the ballots were retrieved.

At the Election Board office, Lockett destroyed the ballots and two discs at the shredder while the office staffers assisted and Shaw and the Osage News witnessed the shredding. The ballot shredding lasted about 12 minutes. Also in the office that day for the meeting were Attorney General Jeff Jones and Raymond Lasley, executive adviser of programs for Principal Chief John Red Eagle’s office.

Those four candidates advanced to the runoff election after earning the most votes for the Executive Branch offices in the Nation’s June 7, 2010 general election. On June 9 of this year, the general election ballots were shredded after the board approved the action.

The 2010 elections are the first ones held by the Nation after the 2006 reformed government started and the Election Board was launched last year.

The next Election Board meeting is scheduled for Aug. 17 at 1 p.m.