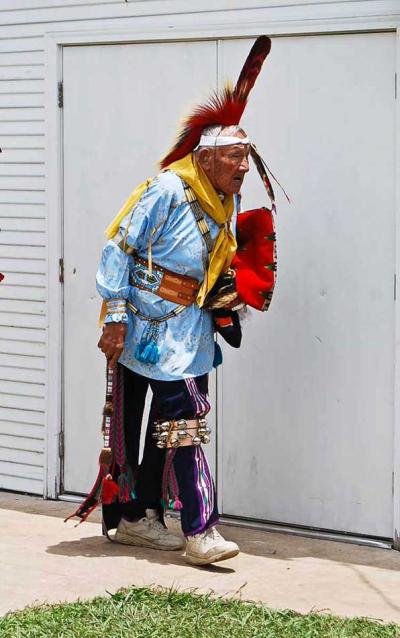 Harry Red Eagle Jr. is known for his countless contributions to many Osage generations as a family man, cultural and spiritual mentor, language teacher, politician and friend. In the end, he earned respect, appreciation, countless friendships and became “Uncle Harry” to many of those who looked up to him.

Red Eagle, a lifelong resident of Hominy, passed away Saturday July 30 at St. Francis Hospital in Tulsa. He was 90.

“Everyone knew him as ‘Uncle Harry,’” Principal Chief John Red Eagle said of Harry Red Eagle Jr., who is a nephew of his. “He was a leader, a mentor, and elder you would go to for advice. He was a part of everyone’s life.”

As a respected elder, Red Eagle met with countless Osage families and gave many people their Indian names.

Harry Red Eagle Jr. was born on Oct. 1, 1920 in Hominy to Harry and Mary (Pappan) Red Eagle, Sr. and started dancing in the In-Lon-Schka dances when he was a boy, Chief Red Eagle said. His dancing days stretched into his twilight years. Red Eagle joined the rest of his fellow Osages under the dance arbors as recent as June 2008, earning admiration from those who saw him dance.

In a 2001 blog for amerinda.org, Wiley S. Thornton wrote reflections on watching Oklahoma tribal dances and spoke of Red Eagle.

“My uncles Harry Red Eagle Jr., Abe Conklin, and Cecil Rouwalk seemed to always be in the winner’s circle,” Thornton wrote. “My ‘Uncle Jr.’ started dancing when he was five years old. He’ll be eighty-one this year and he is still dancing.”

Red Eagle served as a committeeman in the Hominy District which included serving as adviser and head committeeman. He was also a lifelong member of the Native American Church and served as a Roadman at the Red Eagle’s Roundhouse near Barnsdall since the passing of former Assistant Principal Chief Ed Red Eagle Sr.

Harry Red Eagle Jr. worked for 33 years at the McDonnell Douglas Corporation in Tulsa and was also a retired cattle rancher, Chief Red Eagle said. On Nov. 11, 1941, he married Willimina Montgomery in Sedan, Kans, according to his obituary.  She preceded him in death in 1997. They had three children (all survivors): Harry Roy Red Eagle, Anita Red Eagle and Janet Goodfox.

A fluent speaker of the Osage language, Harry Red Eagle Jr. shared his knowledge by teaching language courses in Hominy and at the Whitehair Memorial between Hominy and Fairfax before the Nation’s current Language Department was established. For several years, Red Eagle taught many students, including Tara Damron, who took the language class Red Eagle shared with Kenny BigHorse when she started high school in the late 1990s.

“He was just a special, really nice person,” Damron said. “He talked about growing up (as an Osage), he would talk about the different cultural activities and the dances. His presence is definitely going to be missed.”

As a language instructor, Red Eagle taught his students Osage words, sentences and prayers, which are used for various occasions, Damron said. “He enjoyed teaching the language, Uncle Harry and Kenny (BigHorse) were very helpful.” Those teachings came in handy when Damron ran for the Junior Miss Indian Oklahoma title, which she won in 2000.

In his spare time, Red Eagle enjoyed bowling and loved to follow Hominy Bucks sports as well as University of Oklahoma football, so Red Eagle was excited when Damron told him she chose OU for her college studies, she recalled.

Today Damron is assistant curator for American Indian Collections at the Oklahoma History Center in Oklahoma City where a video interview of Harry Red Eagle Jr. and a few other Osages is in a display of Oklahoma Native American tribes. Red Eagle, Herman “Mogri” Lookout and Archie Mason appear in the video interview discussing the Osage history and culture.

Harry Red Eagle Jr. served on the Tribal Council for five consecutive terms starting in 1978, according to Osage Tribal Museum archives. He served on the 25th through the 29th Tribal Councils while Principal Chiefs Sylvester Tinker, George Tall Chief and Charles Tillman were in office. Harry Red Eagle Jr. also served as Assistant Principal Chief from 1999 to 2002 to finish Ed Red Eagle Sr.’s term after he died in office.

Harry Red Eagle Jr. was this year’s Elder Honoree at the Kihekah Steh Powwow (held July 29-31) in Skiatook. When word of his death spread Saturday, a prayer was said for Red Eagle and his family. The Tulsa Powwow also took place that weekend and a prayer and dance was held in his honor that Saturday night.

Surviving family members are: his three children; a daughter-in-law, Pauline Red Eagle; and several grandchildren, great-grandchildren and nieces and nephews. In addition to his wife, Harry was preceded in death by his parents and a sister, Cecelia Red Eagle Thornton.