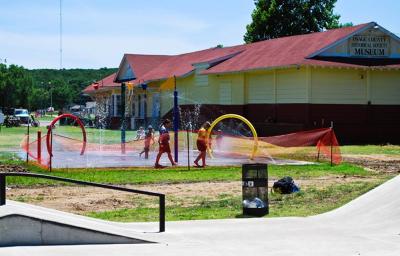 By August’s end, the Pawhuska Skatepark and Splash Pad will be smoke-free thanks to a new smoking ordinance passed by the City Council Monday Aug. 1.

The smoking ban ordinance, which passed by a unanimous vote, targets most city parks, including Ben Johnson Park where the Skatepark and Splash Pad are located. Gail Boe, director of the Osage Nation’s Communities of Excellence program, proposed the smoking ban after her office started receiving complaints about smoking in the park near the two amenities.

One mother told Boe she “had to leave the park because her child had an asthma attack. Litter is another complaint.” Boe said she told the complainants she would ask the City Council to consider the smoking ban.

Boe suggested the five-member council should consider making the ban a law versus a policy so people would be mandated to follow it.

According to the law: smoking and smokeless tobacco is banned in all city-owned parks and recreational areas. However Bluestem Lake is exempted from this ban, Worten said.

Violators of the smoking ban will be charged with a misdemeanor and will be subject to a fine of between $50 and $200.

Pleased by the vote, Boe said the Communities of Excellence would be working on the no smoking signs for the parks and would deliver them to city officials. A “Tobacco-Free Parks Celebration” is also being planned for Aug. 12, she said.

The Splash Pad and Skatepark were both built with supporting grant or donation funding from the Nation’s government or casino enterprise.

The smoking ban takes effect Aug. 31, which is 30 days after the mayor and city officials signed the ordinance, according to the City Clerk’s office.

The ON Communities of Excellence offers education on smoking cessation, and secondhand smoke dangers. The program is funded through the Oklahoma Tobacco Settlement Endowment Trust.