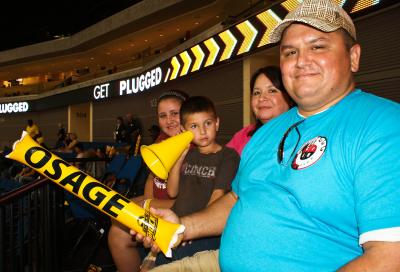 The noisemakers and stomp dancers made for a successful WNBA Tulsa Shock Native American Heritage Night with only one thing missing – a win for the home team.

The Shock hosted the Los Angeles Sparks for their second-annual event where they honored Oklahoma Native American tribes in a pre-show and halftime ceremony.

Tulsa took a 79-74 loss but the fans, many Osage fans, walked away with a winning attitude from the BOK Center in Tulsa on July 15.

Nicole Pratt, Osage, attended the game with her husband and two children. Pratt said it was a new experience for her and her family and they were happy to have been a part of it.

“We took our kids… they had a great time because we’ve never been to anything kind of like professional or semi-professional sports event,” Pratt said. “The atmosphere was fun, they were cheering for the team, the other thing that would have made it better is if they would have won.”

The teams were neck-and-neck throughout the first three quarters but the Sparks ran away with the lead in the fourth quarter and didn’t letup.

Pratt said she did see some other Osage families in the stands but was expecting more.

Pratt said the Osage Million Dollar Elm Casino (now renamed the Osage Casino) handed out noisemakers and megaphones that her children enjoyed. But, what she liked most was the halftime program.

“I though it was a great idea,” she said. “It’s so nice that other people can be exposed to different cultures and they had… a stomp dance, it seemed like other people had an interest.”

The event is still new to the two-year old team. Keith Roberson, account executive for the WNBA Tulsa Shock, said it was a way to unite all tribes in Oklahoma.

He said the organization has a special relationship with the Osage casinos, as they are one of the major sponsors of the team, and because of that they wanted to especially thank the Osage Nation.

Group and single tickets were discounted for the game for the special event.

Mason Cunningham, 20, Osage, said he has waited some time to watch a Tulsa Shock game and finally got his chance.

“I think it was really cool because there are a lot of Native people that don’t have much money and they really cant do much, they were given free tickets,” Cunningham said. “It was a pretty good turn out and there was quite a bit of people.”