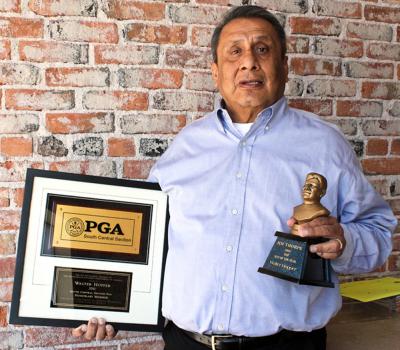 Over 20 years ago, Walter Hopper was busy trying to get a junior golf program started. Now the Osage Native has his very own tournament named after him – The 2011 Walter Hopper Junior Tour Championship.

This year, 136 junior golf players, 120 from Oklahoma and 16 from Arkansas, took over the Rose Creek Country Club in Edmond for the two-day tournament held Aug. 1-2.

The tournament was open to junior golfers ages 9-18 who were split into three age groups.

For the first year under his name, Hopper said the turnout was as good as he expected it to be.

“The tournament went really well with what the temperature was, the kids handled it very, very well,” he said. “I was very pleased and very proud to have my name on that tournament.”

Hopper said the tournament has had several home since he first helped get it started over 25 years ago, but has found a home in Edmond for the last eight years.

He said the event also brings speakers for the young golfers. Past golfers, young golfers going pro and various PGA presidents drop in to talk with the athletes.

Joyce Cherblanc, Operations Manager of PGA Golf Passport, has worked with Hopper for the last five years and said that Hopper is very deserving of the honor.

No Osages played in the tournament but Hopper knows that what he’s done has helped many other native and all young golf players.

He said so far the tournament is one of his biggest golf accomplishments.

“I think it’s really kind of really high on my list now because it’s got my name attached to it,” he said. “I’m pleased to see what I started so many years ago where it has evolved to now. It’s a great tournament very dear to my heart.”