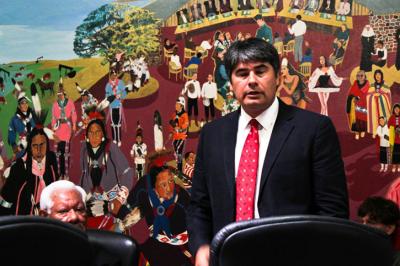 It could be a very good Christmas for Osage shareholders.

The Osage Trust Team announced today (Aug. 17) that they have made an agreement to tentatively settle the Osage Trust Case for $380 million, ending an 11-year court battle with the United States government over the mismanagement of the Osage minerals estate. That is a payout of $155,136 per full share to be made on, or before, Dec. 5 of this year.

“We’ve been in litigation for 11 years now. The prospect of more litigation, more appeals, the Trust Team thought the time has gone on long enough in this case,” said Wilson Pipestem at the Osage Minerals Council meeting today. Pipestem, Osage/Otoe-Missouria, is the attorney for the Osage trust team.

“It’s been an intense few months, to say the least, but we made it this far,” Pipestem said. “Bottomline, before Dec. 5, payments will be made to headright holders.”

In addition to the $380 million, the United States has agreed in principle to processes and actions to improve the management of the Osage Mineral Estate and the Osage tribal trust account, according to a prepared news release.

The settlement is the result of months of negotiations with the U.S. following U.S. Court of Federal Claims rulings that said the Osage Tribe was owed approximately $330 million for claims arising from 1972 to 2000. This ruling was subject to appeals to the Federal Circuit and possibly the U.S. Supreme Court. The tribe and the U.S. were moving toward a trial in early 2012 for the remaining claims in the case, then further appeals, the release stated.

Upon agreement and authorization of the settlement, the United States will deposit $345 million in the Tribal Trust Account and the money will be disbursed to all shareholders of the Osage Minerals Estate, whether they are Osage, non-Osage, or entities.

The law firms representing the tribe will be paid a 9 percent contingency fee.

The trust team is made up of three members of the Osage Minerals Council, the Speaker of the Osage Congress and the Principal Chief of the Osage Nation. They are Galen Crum, Cynthia Boone, Dudley Whitehorn (Chairman), Jerri Jean Branstetter and John D. Red Eagle.

“While not perfect, the proposed settlement represents an end to over a decade of hard fought litigation and a new beginning for improved management of the Osage Mineral Estate and Osage trust funds,” Whitehorn said. “Upon execution of the settlement, our Osage headright holders, including our elders who have waited too long for this settlement, will receive their settlement payout before Christmas.”

Informational meetings for Osage shareholders are being set up to offer more details of the settlement, Pipestem said. The first meeting is scheduled for Aug. 24 at 6:30 p.m., to be held at the Wah-Zha-Zhi Cultural Center in Pawhuska.