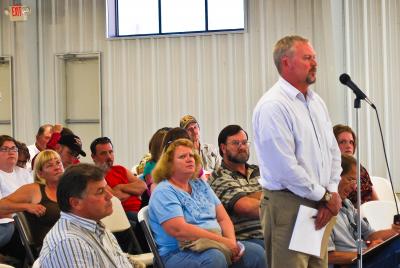 The Osage Agency’s Bureau of Indian Affairs Superintendent says the office did not approve a wind farm ordinance recently established in Osage County and any wind turbine built “may have to be removed or relocated” if it interferes with the minerals estate.

Superintendent Melissa Currey wrote to Osage Nation Principal Chief John Red Eagle and the Osage Minerals Council on Aug. 15 – four days after the Osage County Board of Adjustment approved a variance request for a Missouri-based wind farm developer to build a 94-wind turbine facility on 8,500 acres west of Pawhuska.

If built, the wind turbines would stand approximately 400 feet in height on the prairie and each of the turbine’s three blades would be up to 130 feet in length.

The variance allows the wind farm development to commence on privately owned land initially zoned for agricultural use. The Osage County Commission approved a wind farm ordinance in early April, but the BIA letter raises issue with the recent actions relating to the wind farm project.

“The County Commission has enacted wind ordinances regulating the non-trust portions of the surface estate within Osage County,” Currey writes. “This letter is to notify you that said regulations were not approved by the Bureau of Indian Affairs and are not binding on the mineral estate.”

Currey reiterates that the United States holds the Osage Minerals Estate in trust for the Osage Nation and that “state courts have held that the oil and gas estate is the dominant estate and the surface is the subservient estate. Thus, the minerals estate cannot be denied reasonable access to the surface, and may, indeed, use so much of the surface estate as may be necessary to develop and produce the minerals.”

“This is something we’ve fully expected and it’s a position we’ve taken all along,” Chief Red Eagle said in a news release. "We have always been confident that the Bureau of Indian Affairs would uphold its fiduciary responsibility and we’re pleased with their actions.”

Regarding wind turbine construction, Currey said: “If we find that any particular installation may be interfering with the operations of the mineral estate, that installation may have to be removed or relocated.”

Green acknowledged during the Aug. 11 public hearing on the land variance that he and Osage Nation officials disagree on the wind farm project.

“They’ve made it very clear they have interest in mineral rights and we fully understand,” Green told the Osage News. He defended the project stating the wind turbine construction would only cover 1 percent of the 8,500 acres it would cover.

Green also said construction of a wind turbine would require 10 feet of digging for a concrete foundation and the underground collector system for the electric energy would stretch four feet below ground. “Each turbine will be connected to a centralized substation then (the electricity generated will be) taken into an overhead transmission line in the project area,” Green said.

Most of the Osage County residents who spoke during the Aug. 11 public meeting stated they supported the wind farm, but non-Osage rancher Ford Drummond, who owns 1,200 acres adjacent to the proposed wind farm area, is among those concerned about the project and its impact on his land’s value.

“The value of my property would be severely diminished if there’s a wind farm there,” Drummond said at the meeting. “It’s not a win-win for everybody.” He also raised concerns on potential future tornadoes coming through the area as well as damage to the habitats of the greater prairie chicken and bald eagles who come to nest in the area.

Joe Conner (Osage) also takes issue with land values potentially impacted by the project because his family’s original allotment lands are in northwestern Osage County close to the proposed wind farm. He is also concerned unmarked Osage graves from the 19th and early 20th centuries could be disturbed by the project.

Green said the company plans to “carry out a full archeological site survey” with a team of people familiar with Oklahoma.

In the meantime, the Osage Nation remains opposed to the project. In the news release, Chief Red Eagle said he is disappointed the Nation and the County Commission did not find a “common ground on this issue.”

“We’re taking measured steps toward appropriate court action to protect the property rights of the Osage Nation and the ecosystem of the Tallgrass Prairie,” Red Eagle said.