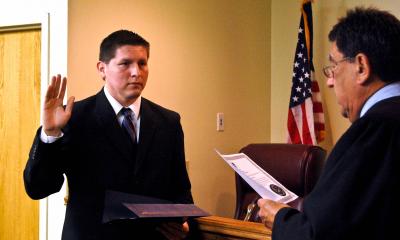 A motion to issue the subpoenas unanimously passed during the Ninth Special Session held July 5 after Congressman Raymond Red Corn noted the Congress received reports from “multiple sources” about collateralization and transfer of money issues “in rather inexplicable ways and possible relaxation of controls.”

This is the first time in the reformed Osage government’s history that it’s sought subpoenas at this size with regards to the number of testifying individuals and various documents and records. All of the documents were to be provided to the Congress before the Congressional Committee on Government Operations conducted the two-day subpoena interviews.

At the start of the July 14 Special Session, Principal Chief John Red Eagle said in his opening address that he believed the Congress and his office needs a communication process because “in my opinion, subpoenas should be the last resort.” Before the meetings, Kemble also told the Osage News July 9 his office was not aware of any Congressional requests for information prior to the subpoena-voting date, but welcomed the inquiries to resolve any concerns.

Congressional Speaker Jerri Jean Branstetter defended the Special Session for the subpoenas because a breakdown in communication occurred between Congress and the Executive Branch after learning of the collateralization issues regarding the bank accounts in question on May 31, she said in a statement after the subpoena meetings.

Issues raised during the two-day meeting include a transfer of $300,000 from the Osage Minerals Council’s C-395 bank account to the ON government’s general account on June 21 and whether the transfer was legal.

The 2006 legislative bill creating the Treasury Department was also a sticking point with regards to language identifying whether “policies and procedures” are the same as “regulations” specified in the bill. According to the bill, the Congress must approve any amendments to the regulations set by the Treasurer.

The 2004 policies and procedures manual for the Treasurer was heavily discussed as well because Kemble told Congress parts of it were outdated and do not reflect the reformed government, which started in 2006.

In his July 15 interview, Kemble said the seven-year-old accounting policies and procedures manual needs updating “as soon as humanly possible.” He also believes the accounting controls need to be updated to reflect the reformed 2006 tribal government.

“I want to stress to our Osage public that the development of these accounting policies can and will take some time to get in the ground, but since my arrival I have been using as many resources as I can to update them properly,” Kemble said.

“Yes, I acknowledge that I have come across many occasions where I felt it absolutely necessary without a formal fiscal policy to take steps to implement internal controls to ensure the Nation’s monies and assets are safeguarded… and our credit line is protected.”

On June 21, the Nation transferred $300,000 from the C-395 bank account after banking officials notified Kemble that there were collateralization issues in securing the money’s safety. The money was transferred from Pawhuska’s First National Bank to Citizen’s Bank also in Pawhuska.

Young, an accountant who manages the OMC accounts and who was subpoenaed by Congress, said this is the first time she has seen the account funds transferred since she’s managed the C-395 account. She gave her testimony July 14.

Kemble, Chief Red Eagle and Assistant Chief Scott BigHorse met with First National Bank officials in Pawhuska where the C-395 account was kept. During Kemble’s interview, Assistant Principal Chief BigHorse said the bank made the suggestion of transferring the money because the account balance was above the insurable limit set by the Federal Deposit Insurance Corporation (FDIC). According to the FDIC Web site, it insures each depositor up to $250,000 per insured bank.

Kemble said he was also told the bank would be subject to penalty costs if the account remained over the limit and the funds would be at risk should a tornado strike and damage the bank.

Congressman William “Kugee” Supernaw asked why no quarterly financial reports have been provided to the Congress or published in the Osage News, which is noted in the Treasury law. Kemble said the reports, if submitted, would not be accurate because some accounts have not been updated.

When he was asked a closing-of-the-books question earlier by Congresswoman Alice Goodfox, Kemble said he noticed there are accounts with grant awards from 1997 which means the Nation hasn’t formally closed out the award, so that affects the account balances.

Kemble said he spoke with Assistant Principal Chief BigHorse recently and said “If I ran a report today and posted it on the Osage News saying this is what happened in fiscal year 2010, I think it would show we have somewhere in the neighborhood of $430 million in revenues… but I know we don’t have that. The ramification for that is giving the wrong idea to the Osage people.”

Congress questioned whether all proper parties were informed regarding the C-395 bank account transfer. When asked if she was given instructions to inform anyone of the C-395 transfer, Young said no.

Congresswoman Shannon Edwards, who sponsored the 2006 bill creating the Treasurer’s office, said “One of the things in the Treasury bill is a section that speaks to regulations and that’s what the policies and procedures manual is, it’s the regulations governing the accounting office, right?”

According to Section 3-109 of the Treasury bill, “The Treasurer shall submit his regulations for the administration of funds in control of, belonging to or owed to the Osage Nation, for the approval of the ON Congress, or any proposed amendments thereto by the fifteenth legislative day of each regular session of Congress.”

After the subpoena interviews, the OMC and Bureau of Indian Affairs Superintendent Melissa Currey said they would conduct an audit of the C-394 money.

In preparing for the subpoena interviews, the Congressional Affairs Committee met before the July 5 session and voted to appropriate money “to hire an outside (certified accounting) firm to review documents that are collected via subpoena” and that firm will assist the Congress in evaluation of the records and testimony.

In a statement posted to the Congressional Web site after the meetings, Speaker Branstetter wrote: “The work of the Congress continues.  It may take several weeks for the Governmental Operations committee to review the testimony and draft findings.  In the meantime, the Executive branch has full authority to address the problems exposed by the hearings just completed.”