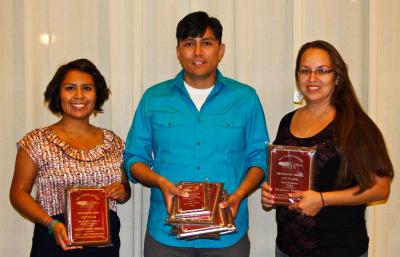 The Osage News and its staff won a total of seven Media Awards from the Native American Journalists Association during this year’s annual conference in South Florida.

The newspaper’s Web sitewww.osagenews.org won first place for Best Online Newspaper in its respective division. This is the first year the Web site has won an award in this category since it was launched in 2009.

This year, the newspaper took first place for General Excellence in the monthly/ bi-monthly category for its 2010 election coverage.

The newspaper’s election coverage included: covering the June 7 general election and the July 19 runoff election for the Executive Branch’s top two posts; hosting two election candidate debates before those elections; and reporting on any late-breaking developments related to the election.

The newspaper also invited the candidates to reply to a “question of the week” on various political topics affecting the Nation. Those replies were then posted on the newspaper’s Web site. Over 50 Osages ran for office last year seeking election or re-election to the ON Principal Chief and Assistant Principal Chief’s offices; six open seats on the ON Congress; and eight seats open on the Osage Minerals Council.

Sports writer Sunnie Clahchischiligi, who joined the Osage News staff earlier this year, won first place for a 2010 story she wrote while working at the Navajo Times. Her first place finish is for Best Sports Story in the respective category for the newspaper.

This is the third year the Osage News has participated in the annual NAJA Media Awards contest in which it competes with tribal media outlets from across the country. This year’s Media Awards were announced at the NAJA conference in Fort Lauderdale, Fla. on July 16. Last year, the newspaper earned five NAJA Media Awards.